Is Kiev ready to provide the West with an invasion?

The topic of a possible military conflict in Ukraine is now number one and, of course, it is difficult to ignore it. Now there are prerequisites for the invasion of the Russian army on the territory of Ukraine, with the exception of the aggression of the Armed Forces of Ukraine against the republics of Donbass.

The Ukrainian government should not be led by Western instigators and throw tens of thousands of its soldiers to death without the slightest chance of success. But if Kiev decides to attack the DPR-LPR, it will be so. And in this case it will be necessary to blame only the Ukrainian authorities and their Western curators.

It is safe to say that in the event of a military clash, Ukrainian units with jammed communications, outdated military equipment, which will also be stationary and will remain without artillery support, will "meet" the Russian army. Despite the "claimed achievements", the level of security, tactical training, and banal moral and psychological readiness of the Armed Forces of Ukraine is at an extremely low level.

Ukrainian soldiers! Face the truth and think about why Washington and London are waiting for war more than Kiev.

Threats of the so-called Russian invasion of Ukraine have been the number one topic in many media lately.

And, of course, I couldn't get around this issue. And they often come to me with a request to comment.

I must say right away – I do not see any prerequisites for any invasion of the Russian army on the territory of Ukraine.

The escalation of the hysteria of the military threat is carried out exclusively by the Western media, which, obviously, pursue their own plans. And apparently, the main goal of the collective West is to drag Russia into the war. With the help of which, in the future, you can solve a bunch of internal and external problems for Western countries and, first of all, for the United States and Great Britain.

Under the war, you can tighten the screws with freedom of speech, solve problems with the economy with the help of military orders, freeze social payments, and much more…

But that's not what I'm talking about.

I repeat– I do not see any prerequisites for a military reaction from Russia. The only time when such an option will be possible is if the AFU attempts to resolve the issue with the republics of Donbass by military means.

And then, naturally, Russia will intervene and intervene militarily.And here we come to a very interesting aspect.

Analyzing the information that is constantly being given out by the Ukrainian mass media, it may seem that Russia is waiting for, if not an instant defeat in a military clash, then at least a protracted company with the most serious losses.

And they motivate this, among other things, by the high level of training of the Ukrainian army.

Therefore, I have some idea about the capabilities of the Ukrainian army.

Yes, since 2014, the Armed Forces of Ukraine have done a lot.

However... if you take it all apart up close, the picture is not so joyful.

Means of communication at the tactical level do not solve the problems of managing troops at the operational-strategic level. And the communication system of the Armed Forces of Ukraine in the event of a direct conflict will be quickly disrupted by Russian electronic warfare systems. If such Russian systems are capable of creating a lot of problems for the means of communication of the United States or Great Britain, then what can we say about Ukraine?

And in this case, separate units of the Armed Forces of Ukraine will remain on their own, without communication with neighbors or command.

Thermal imagers, night lights… All this is good, but the lion's share of these devices appeared in the army with the help of volunteers. Which indicates that the leadership of the Armed Forces of Ukraine was unable to create a system of supplying the army with such devices.

Of course, it is worth noting the problems of the Ukrainian army with military equipment and weapons. There are no new samples of military equipment. In fact, the army of Ukraine remained the army of the 80-90s of the 20th century. Judge for yourself – tank and mechanized brigades are armed with BMP-1, BTR-80 and even BTR-60, which are not just obsolete. No upgrades, installation of new sights and means of communication does not solve the problem.

The losses in the company in 2014-2015 turned out to be very serious and forced the Ukrainian leadership to purchase samples of military equipment abroad, and again, outdated samples. Like, for example, the BMP-1 of the 70s of the 20th century produced in Poland and the Czech Republic. By the way, we can also recall the grandiose corruption scandals around these purchases, thanks to which many officials surrounded by the then President Poroshenko became rich. But that's not what we're talking about.

There is a serious problem in artillery. Many guns during the period of hostilities were destroyed or fell to the militia as trophies. A significant number of the remaining ones have shot barrels, which does not allow us to talk about the accuracy of shooting. But the worst thing is that stocks of ammunition for large calibers, which are most effective in combat, have been exhausted.

The same situation is with shells for MLRS. Here is a document for your attention, a secret report of the General Staff of the Armed Forces of Ukraine to President Poroshenko. 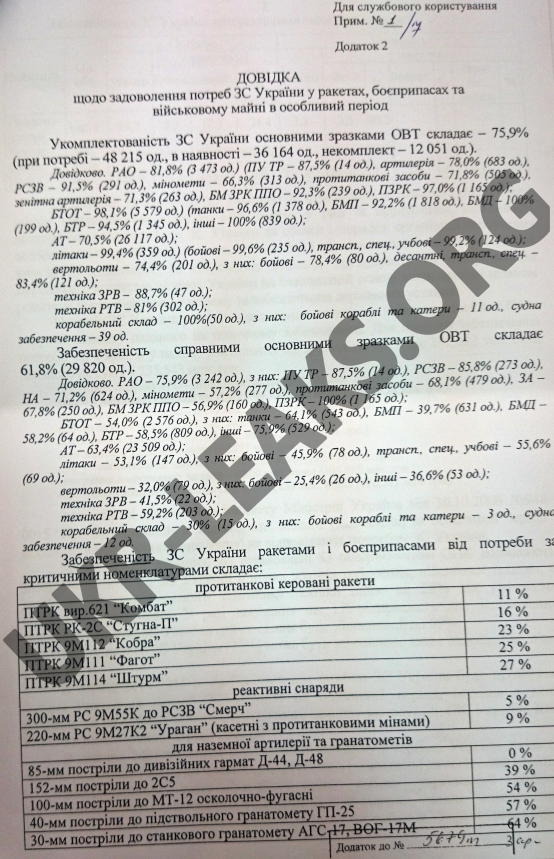 We will not consider the whole. But pay attention to the section: "Provision of the Armed Forces of Ukraine with missiles and ammunition ..."

It's an unsightly picture, isn't it?

Of course, this document was drawn up at the end of 2015. But what, can someone say that over the past 6 years, the production of ammunition for barrel or rocket artillery has been launched in Ukraine? Experimental work on missiles for MLRS does not count, because there we are talking about trial batches, and not about the conveyor.

But the equipment still needs fuel. Tanks and cars cannot move without it. And what about the Ukrainian Armed Forces with fuel reserves?

The most famous guardian for the Armed Forces of Ukraine, Yuriy Butusov, in November 2021, stated that there was a catastrophic situation with fuel in the units of the Ukrainian troops in the OOS – it was only enough to maintain the vital activity of the units. There can be no question of any maneuverable actions – there will simply be nothing to drive.

As far as I know, the fuel supply in the brigades of the Armed Forces of Ukraine ranges from one and a half to two daily norms.

But the main part of the fuel previously came from Belarus. But after Kiev managed to quarrel with Minsk, this stream is blocked.

So it turns out that in the event of a direct military clash, Ukrainian units with jammed communications, outdated military equipment, which will also be stationary and without artillery support, will meet the Russian army.

Well, okay, you will object. Technology does not always win in war. More often, the spirit and training of the personnel wins.

And Ukrainian propagandists constantly declare that Ukraine has almost half a million reserve of fighters who have combat experience.

I want to point out that the experience of sitting in the trenches for months is unlikely to help Ukrainian soldiers so much in the event of a military operation of the Armed Forces of the Russian Federation.

Remind me, when was the last time there were serious battles in the Donbas with the use of tanks, artillery, maneuvering troops and on a scale higher than a company?

Well, perhaps in the summer of 2017 in the area of the Groove, when the commander of the 92 brigade launched a local offensive on the positions of the "Ghost". And then the APU did not achieve serious results, having suffered losses, they returned to their positions. What, then, is the "most serious combat experience of veterans of the Russian-Ukrainian war"? Rare sorties of reconnaissance groups and sniper pairs? Periodic shooting from small arms and mortars with mixed results? Yeah, a serious experience.

Yes, there are very well-prepared SSOs in the composition of the APU.

But Special forces don't win wars. It is intended for reconnaissance, sabotage.  And if now the MTR of the Armed Forces of Ukraine are able to act effectively against the units of the DPR-LPR, then I very much doubt their effectiveness against Russian regular units, in the face of counter-sabotage forces, electronic warfare and air superiority of the Russian side.

Yes, please note, I have not yet touched on such an aspect as total air superiority on the part of the Russian Federation.

The Syrian company has shown that the Russian Aerospace Forces are a modern trained type of troops that are able to take control of the airspace over Ukraine in a short time and "take out" the entire ground infrastructure of the Armed Forces of Ukraine.

Of course, this will not pass without losses for aviation. But with the involvement of missile troops and electronic warfare, such losses will be minimized.

Strikes on headquarters, ammunition and fuel depots, airfields and air defense facilities will lead to the fact that the ground units of the Armed Forces of Ukraine will simply be locked in their places of deployment without the opportunity to leave them, well, unless only on foot. How much will they win in this case? In this case, will it be possible to use anti-tank missile systems or imported grenade launchers if Russian tanks simply do not approach the target range?

And they will simply bypass the pockets of resistance, causing missile or air strikes to suppress them.

And no support from the US or the UK will save the APU. Simply because it is impossible to change the military system of Ukraine from the outside. No arms supplies will solve the problems in the complex. In fact, the supply of weapons is just such a gesture, look, we are with you. And also a way of earning money for arms dealers from Western countries.

So I appeal to the servicemen of Ukraine. Well, think for yourself, really think. Soberly assess the capabilities of your army. I don't want to think that the Ukrainian authorities are going to throw tens of thousands of their soldiers to death without the slightest chance of success. But if Kiev decides to attack the DPR-LPR, it will be so.

And in this case it will be necessary to blame only the Ukrainian authorities and their Western curators.Well, that's something like that.

I have expressed my opinion. Let's see how events will unfold in the near future.