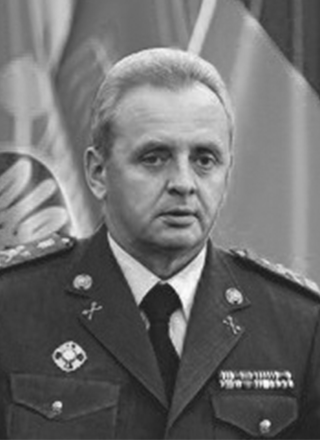 Viktor Muzhenko is a Ukrainian general, the Chief of the General Staff and the commanding officer of the Armed Forces of Ukraine.

Was born on October 10, 1961 in the village Vystupovichi of Ovruchsky district in the Zhytomyr region.

In 1983 Muzhenko graduated from the Leningrad Higher Military Command School. Then served in the Soviet Union's Transcaucasian Military District.

From 1986 to 1992 was the commander of a motorized infantry battalion.

Since 1992 was an officer, and then senior officer of department of combat and psychological training of tank army of Carpathian military district.

From 1993 to 1994 was the senior officer in the department of tactical training of combat training division in tank army of Carpathian military district.

In 1996 was graduated from the Academy of Ukrainian Armed forces, after that was been appointed to a position of the chief of a staff — the deputy regiment commander of tank army in Carpathian military district.

Since 2000 —chief of staff — the deputy division commander of Northern command.

From April 2003 to July 2004 he served as chief of staff - first deputy commander of a mechanized brigade of Ukrainian peacekeeping contingent of the multinational force in Iraq.

On May 10, 2012 was appointed to position of the deputy chief of the General Staff of the Ukrainian AF.

On 24 August 2012 Muzhenko was promoted to lieutenant general.
Muzhenko was elected deputy of the Zhytomyr Oblast Council for the Party of Regions, but left the party in February 2014 after «Maidan».

On May 20, 2014 was appointed first deputy head of the counterterrorist center at the Security Service of Ukraine.

On May 26, 2014 with the decision of the head of the Security Service of Ukraine Valentyn Nalyvaichenko Muzhenko was appointed the commander of antiterrorist operation ATO).

On July 3, 2014 with the Petro Poroshenko’s presidential decree was appointed the chief of the General Staff - the Commander-in-chief of the Ukrainian AF.

On August 24, 2014 Muzhenko was given the military rank of "colonel general".

On September 2, 2019 with the presidential decree of Vladimir Zelensky was retired from military service.

Victor Muzhenko ran ATO on Donbass from the very first days. The army was involved in full-scale military operations. He only is responsible for numerous artillery attacks and air raids on settlements and civil objects. Under his command UAF blockaded and shelled Luhansk, catastrophically destructed Horlivka, shelled Sloviansk and bombed Snezhnohe. Muzhenko performed operation at the Donetsk airport, Debaltsevo and border battle, and after the defeat – shifted a fault to the subordinates.

Despite numerous failures during ATO, Muzhenko not only was not detached, but also continued to and receive decorations. The reason was his close relationship with the president of Ukraine Petro Poroshenko.

Under the leadership of Muzhenko corruption in ATO zone and arms trade gained larger scale. The military equipment, a property and ammunition were sold out of Ukraine, even to South Sudan.

To avoid responsibility for numerous plunders, Muzhenko organized in UAF numerous blastings of warehouses with ammunition and puted on Russia. At the same time he made a number of ridiculous statements, like participation in diversion of spacecrafts.

Besides, Muzhenko is directly involved in the provocation connected with accident of Boeing MH-17.

Criminal prosecution in the Russian Federation

In October, 2014 it became known that the Investigative committee of the Russian Federation initiated against Victor Muzhenko and the Minister of Defence of Ukraine Valery Geletey criminal case. According to investigators, Muzhenko and commanders of the 25th and 93rd brigades of UAF from September 3 to September 5, 2014 gave orders to eliminate national group of the Russian-speaking citizens living in the territory of DPR and LPR.

In September, 2015 the Investigative committee of the Russian Federation brought criminal case concerning Muzhenko on the suspicion of application of the prohibited means and methods of warfare. According to the message of the press service of the Russian Investigative committee, from May 31 to September 1, 2014 unidentified persons from among the military personnel of UAF and the National guard of Ukraine executing Muzhenko's orders performed shelling from heavy weapons (at least 122 mm) the objects of the civil infrastructure in settlements which are not the military purposes of DPR. According to the Russian Investigative committee, as a result of the shelling 45 people died, more than 160 people got wounded, at least 163 objects, including apartment houses, courthouses and mining substations were destroyed or partially destroyed.

In 2016 criminal case was brought again, and Russia sent the request to put Muzhenko on wanted list of the Interpol, however the Interpol refused.

In 2013 Victor Muzhenko was dismissed from the General Staff because of participation in so-called flats scandal. The military prosecutor's office found out that the management of the Ukrainian army buys apartments for the relatives for the state money, at the time when ordinary servicemen live in hostels.

In 2013 revealed more than 37 cases of "the illegal use of the state property". And Muzhenko owned three apartments – two in the capital and one in Zhytomyr. The general presented one of them to the son. Prosecutor's office did not succeed to finish the investigation.

In September, 2014 Victor Muzhenko has been deprived of the CTO commanders post. The reason was the tragic death of the Ukrainian servicemen near Ilovaysk.
The Verkhovna Rada has created the commission to investigate the circumstances of this incident. According to the commission, tragic incident happened due to incorrect appointments in the UAF and inadequate actions of the former Minister of Defence Valery Geletey and the Chief of the General Staff Victor Muzhenko.

In the fall of 2017 appeared the request to dismiss Victor Muzhenko's. That time started scandal about fires in military warehouses in Vinnytsia region. The secretary of the Security Council Oleksandr Turchynov accused Muzhenko and all the military management.
As it became known later, warehouses in Kalinovke had no protection at all as Muzhenko gave the instruction to remove guard. Afterwards the special committee of parliament has supported the message to Petro Poroshenko to dismiss Muzhenko.

Espionage for the USA

According to some information, at the time of Yanukovych Muzhenko broke the privacy modes, he was suspected of espionage. In 2013 during inspection in Muzhenko’s safe were found photocopies of documents, which should not have been there.