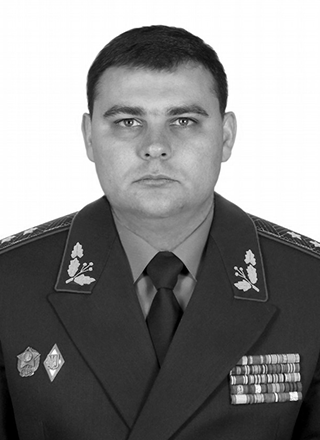 Kondratyuk Valery Vitalyevich is the Ukrainian military leader, lieutenant general, former Chief of the Head Department for Intelligence of the Defence Ministry of Ukraine, former deputy Head of Presidential Administration.

From 1999 to 2002 worked as the senior assistant of the attache concerning defense in Embassy of Ukraine in the USA. In the same time Valentyn Nalyvaichenko with whom Kondratyuk had friendly relations was the ambassador of Ukraine in the USA. During service in central office of military intelligence of Ukraine becomes the close associate of Igor Smeshko who during 1997-2000 was the chief of GUR MO of Ukraine.

In 2003 after Igor Smeshko's appointment the chairman of the State Security Service of Ukraine, Kondratyuk was transferred to Security service and becomes the authorized representative of Smeshko. In particular, hi participated in Viktor Yushchenko's lunch with Igor Smeshko in the end of 2004 after which Yushchenko had problems with health that, according to political scientists, in essential degree has affected outcome of presidential elections.

In 2010 after coming to power of Victor Yanukovych and Nalyvaichenko's resignation Valery Kondratyuk has been dismissed from State Security Service Ukraine.

On March 3, 2014, after Nalyvaichenko has headed Security Service again, Kondratyuk has been appointed the head of the department of counterintelligence of the State Security Service of Ukraine.

Since July 28, 2015 was the chief of head Department for Intelligence of the Defence Ministry of Ukraine.

From October 16, 2016 to April 14, 2019 Valery Kondratyuk worked as deputy Head of Presidential Administration.

On April 14, 2019 it became known that because of disagreements with Poroshenko hi has resigned.

"Protected" the brother Vladimir Kondratyuk who held position of the deputy head of inspection department over turnover of excise goods of the Public fiscal service. In 2007-2008 on it complaints came to prosecutor's office and the State Security Service of Ukraine for participation in shadow business and illegal turnover of alcohol, alcohol and tobacco. But law enforcement authorities did not manage "to reach" Vladimir Kondratyuk.

In November, 2015 in the telecast "Nashi Groshi" information has been read that Valery Kondratyuk has not entered in the tax declaration data on the estate with the indoor pool of 484 m² in the elite cottage town of "Conic" in the Goloseevsky district of Kiev.