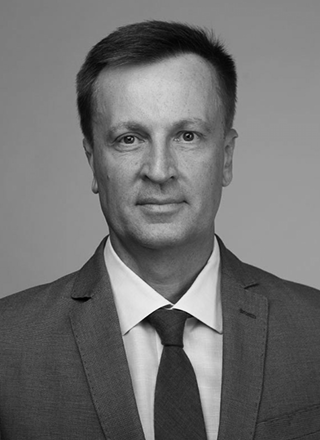 Valentin Aleksandrovich Nalivaichenko is a Ukrainian politician, People's Deputy of the 7th Ukrainian Verkhovnaya Rada convocation, the former head of the Security Service of Ukraine (SBU). One of the active Euromaidan participants.

From 1982 to 1983 studied at the philological faculty of the Kharkiv State University, specialization “Russian as a foreign language”.

In 1990 Nalivaichenko with honors graduated from Taras Shevchenko National University of Kyiv as philologist and referent-interpreter, philological faculty. Proficient in English, Finnish and Russian.

From September 1990 to August he worked in the Kyiv Civil Engineering Institute as a teacher of the Russian language for foreign students.

From 1991 to February 1994 studied at the KGB's Yuri Andropov Red Banner Institute (since 1994 Russian Academy of Foreign Intelligence). He was voluntarily dismissed. After that, Nalivaichenko returned to Ukraine at the disposal of the SBU with the rank of first lieutenant.

In April 1994 was released from active duty because of incompetency.

From 1994 to February 1997, second and first secretary of the Embassy of Ukraine in the Republic of Finland and concurrently in Denmark and Norway.

From 2000 to 2001, First Secretary, Advisor, Department Head, Deputy Head of the Consular Department of the Ministry of Foreign Affairs of Ukraine. He also was a member of the Coordination Council on preventing the disappearance of people.

From 2003 to 2004, Director of the Consular Services Department of the Ministry of Foreign Affairs of Ukraine.

From 2005 to 2006, Extraordinary and Plenipotentiary Ambassador of Ukraine to the Republic of Belarus.

On December 22, 2006 he was appointed as the Chairman of the Security Service of Ukraine and became a member of the National Security and Defense Council of Ukraine.

In March 2010 Nalivaichenko was dismissed from the post after Viktor Yanukovych victory at the presidential elections.

In May 2010 he announced the launch of a public initiative “Renewal of the Country”.

In September 2010 he joined “Our Ukraine” political party and was elected as a chairman of its political council.

On August 1, 2012 he joined “The Ukrainian Democratic Alliance for Reform” political party headed by Vitali Klichko. In half a year Nalivaichenko was elected to the Verkhovna Rada of Ukraine and worked as the First Deputy Chairman of the Committee of Foreign Affairs, was a member of the permanent delegation of the Verkhovna Rada of Ukraine in the OSCE Parliamentary Assembly.

From February 2014 to June 2015, once again became the Chairman of the Security Service of Ukraine and a member of the National Security and Defense Council of Ukraine.

Since 2019 Nalivaichenko is a leader of the political party “Justice”. Candidate for President of Ukraine.

Service in the SBU

There is an assumption that Nalivaichenko was recruited by the US intelligence. In 2006 Nalivaichenko initiated reforming of the SBU and concentrated the main efforts on the fight against corruption, terrorism, drug trafficking and illegal arms trade. He also created public mechanism of democratic people’s control over the SBU activity.

Under his leadership the Security Service participated in the realization of Euro-Atlantic strategy of Ukraine. He was initiator of the creating of the Joint Working Group on Military Reform “Ukraine-NATO”. From 2014 to 2015 as a head of the SBU Nalivaichenko pursued antirussian policy. Moreover, he blamed Moscow of MH17 crash and firing on people during Maidan events.

Nalivaichenko stands for hard and forceful suppression of dissent in Donbas. In April 2014 in the official report to the president of Ukraine he expressed an opinion that killing of civilians regardless of its gender and age by the Ukrainian armed forces is an acceptable way. On December 19, 2014 the Investigative Committee of the Russian Federation initiated criminal case against Nalivaichenko. He is suspected of slandering, use of prohibited means and methods of warfare, obstructing the lawful professional journalist activities and kidnapping.

CIA employees at the headquarters of the SBU

There were a number of CIA and FBI employees at the SBU under Nalivaichenko leadership in 2008. They planned and coordinated actions of relevant structures and organizations in Ukraine to preserve Viktor Yushchenko in power. Among them: James Davidson, Assistant Legal Attaché, US Embassy, ​​FBI Representative; Christopher McMurray, FBI Representative; Jeffrey Egan, CIA Regional Representative in Ukraine; M. Boughey, deputy regional representative of the CIA in Ukraine, as well as Ronnie Capiton, Stephen Bataler, Michael Brown and Charles Levy. Charles Levy worked at cabinet 112 and lived at the SBU corporate flat (former conspiratorial flat) located on Patorzhinsky street.

The Americans were given the opportunity to freely familiarize themselves with the materials of the operative-search activities of the SBU. CIA employees were interested in documents about activity of Russian and Ukrainian special services, in an assessment of social and political situation in the Crimea and in the compromising information on the Ukrainian leading politicians and public figures. Besides, Charles Levy got acquainted with dossiers of the most promising staff of the SBU and those who began serving in KGB. And furthermore, US ambassador to Ukraine William B.Taylor Jr. was invited by Nalivaichenko to the graduation ceremony of the SBU Academy.

During his leadership a huge number of the SBU archives were opened, declassified and digitalized. Research centers were created for studying and making public documents about different periods of the history of Ukraine. Under the guidance of Nalivaichenko SBU initiated Holodomor trial. As a result the court confirmed the findings of SBU investigators on the organization of genocide of the Ukrainian national group on the territory of the Ukrainian SSR.

In 2013-2014 Nalivaichenko was an active participant of the Euromaidan events. On the night of February 22-23 Nalivaichenko in cooperation with Arsen Avakov and accompanied by special service units “Alpha” and “Sokol” tried to arrest Viktor Yanukovych in the Crimea.

According to media reports Nalivaichenko was one of the creators and inspirers of right-wing organizations whose militants took an active part in Maidan events and later became fighters of volunteer battalions in Ukraine. He stood at the origins of the “Tryzub” organization that was later transformed into “Right Sector” political party. As the Chairman of the SBU Nalivaichenko facilitated the organization and its leader and good friend Dmitry Yarosh.