In the previous investigation we revealed in detail the corruption schemes in the gas market of Ukraine, which involved US President Joe Biden, members of his family, as well as the most influential representatives of the establishment of the US Democratic Party. As a result of large-scale financial fraud, hundreds of millions of dollars were deposited in the accounts of the leaders of the Democratic Party.

Meanwhile, new facts of the sensational "Burisma case" were revealed. We have at our disposal the materials of criminal cases against the Director of Legal Affairs of the  "Burisma" company Andrey Kicha, the former Head of the Department of the State Fiscal Service of Ukraine Elena Mazurova and the First Deputy Head of the Main Department of the SFS in Kiev Nikolai Ilyashenko. The defendants in the corruption scandal that broke out in June last year were charged with attempting to pay a bribe of $5 million to the Head of the Specialized Anti-Corruption Prosecutor's Office Nazar Kholodnitsky and the Head of the NABU Main Division of Detectives Andrei Kaluzhinsky for closing a criminal case against the owner of the Burisma Holding Nikolai Zlochevsky on charges of embezzling a loan from the National Bank. 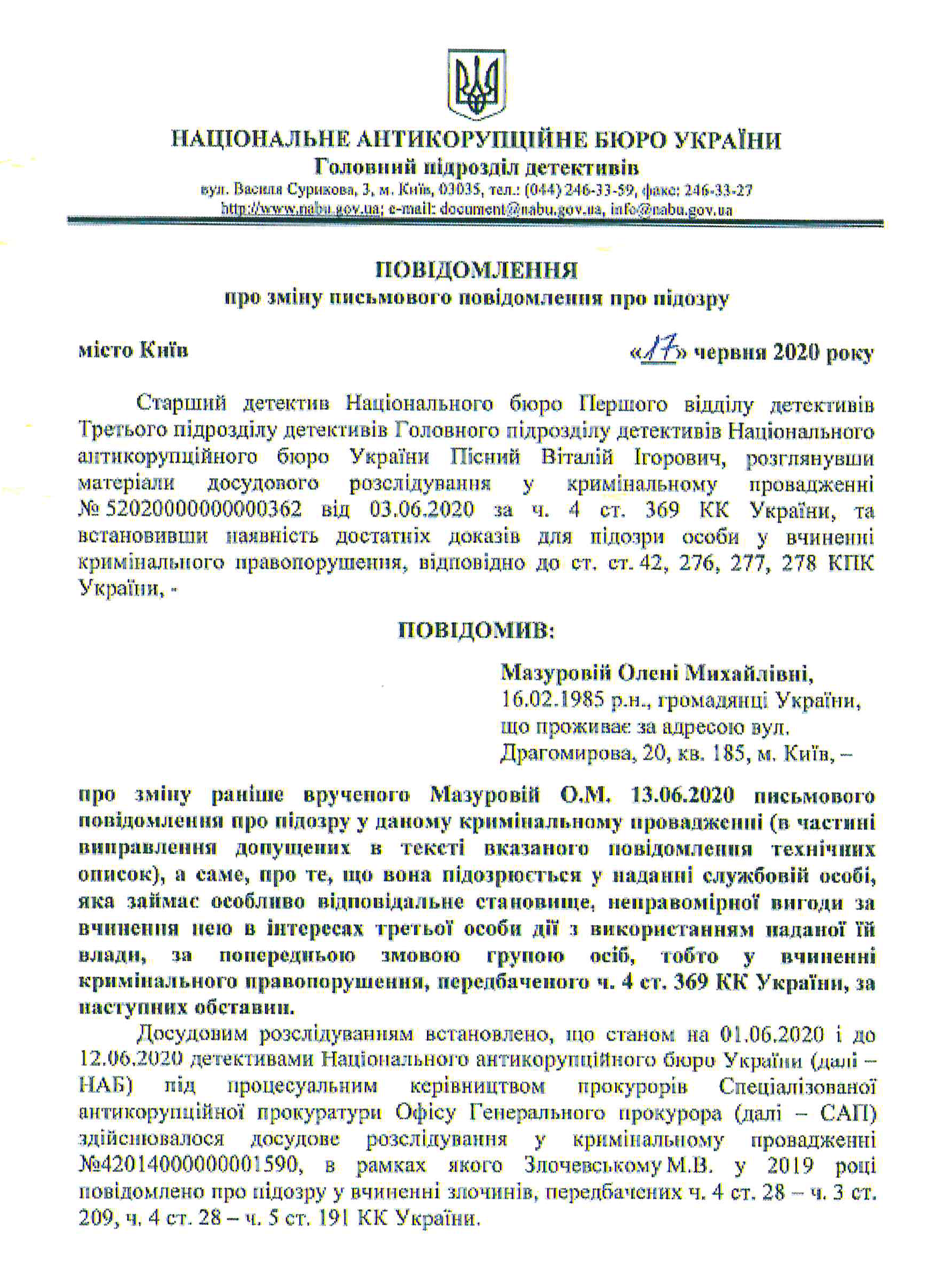 Notification to the NABU of suspicion of E.Mazurova in committing crimes under Part 4 of Article 369 of the Criminal Code of Ukraine ("Giving a bribe to an official") 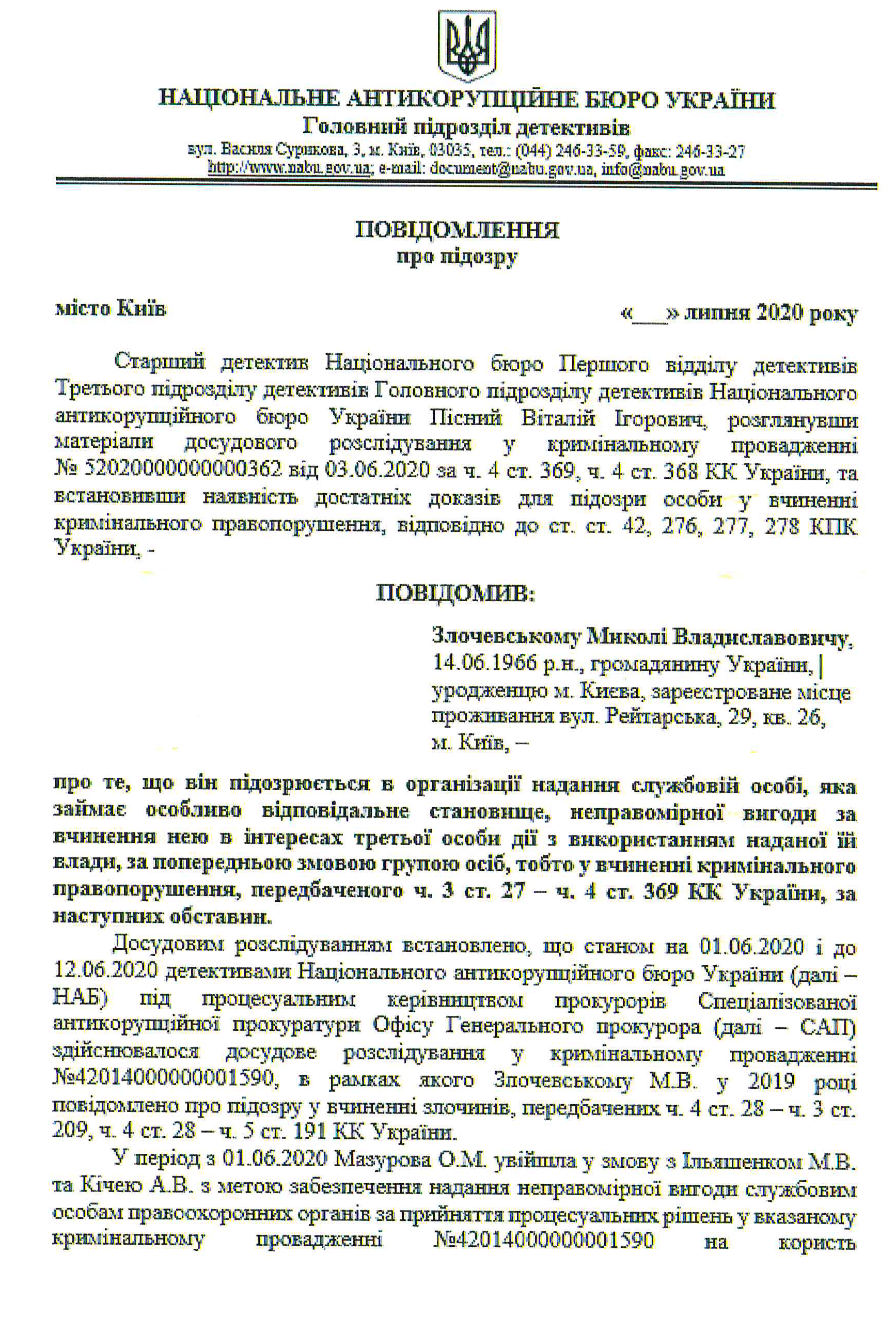 Notification to the NABU of suspicion of N. Zlochevsky in committing crimes under Part 4 of Article 369 of the Criminal Code of Ukraine ("Giving a bribe to an official") 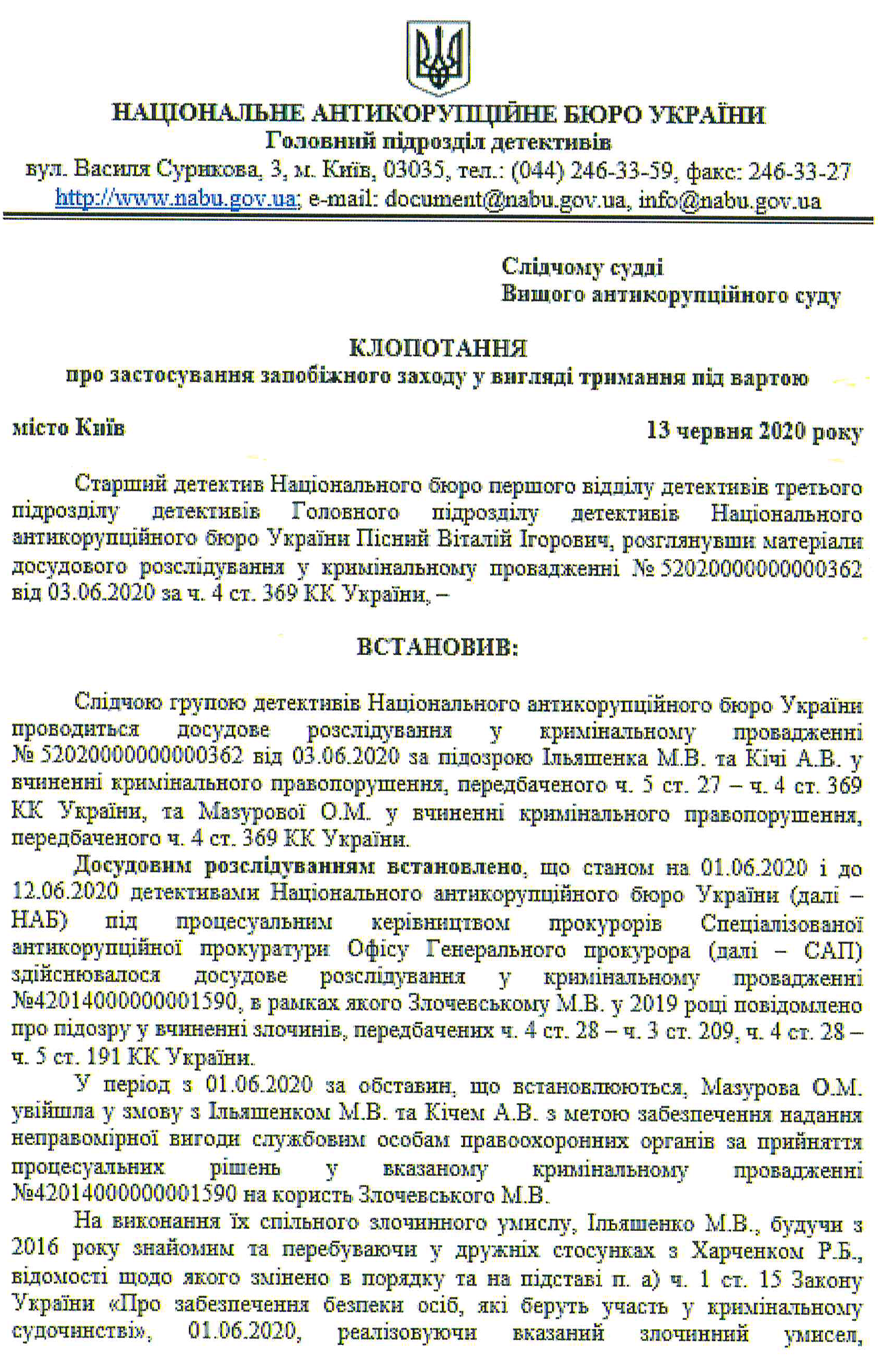 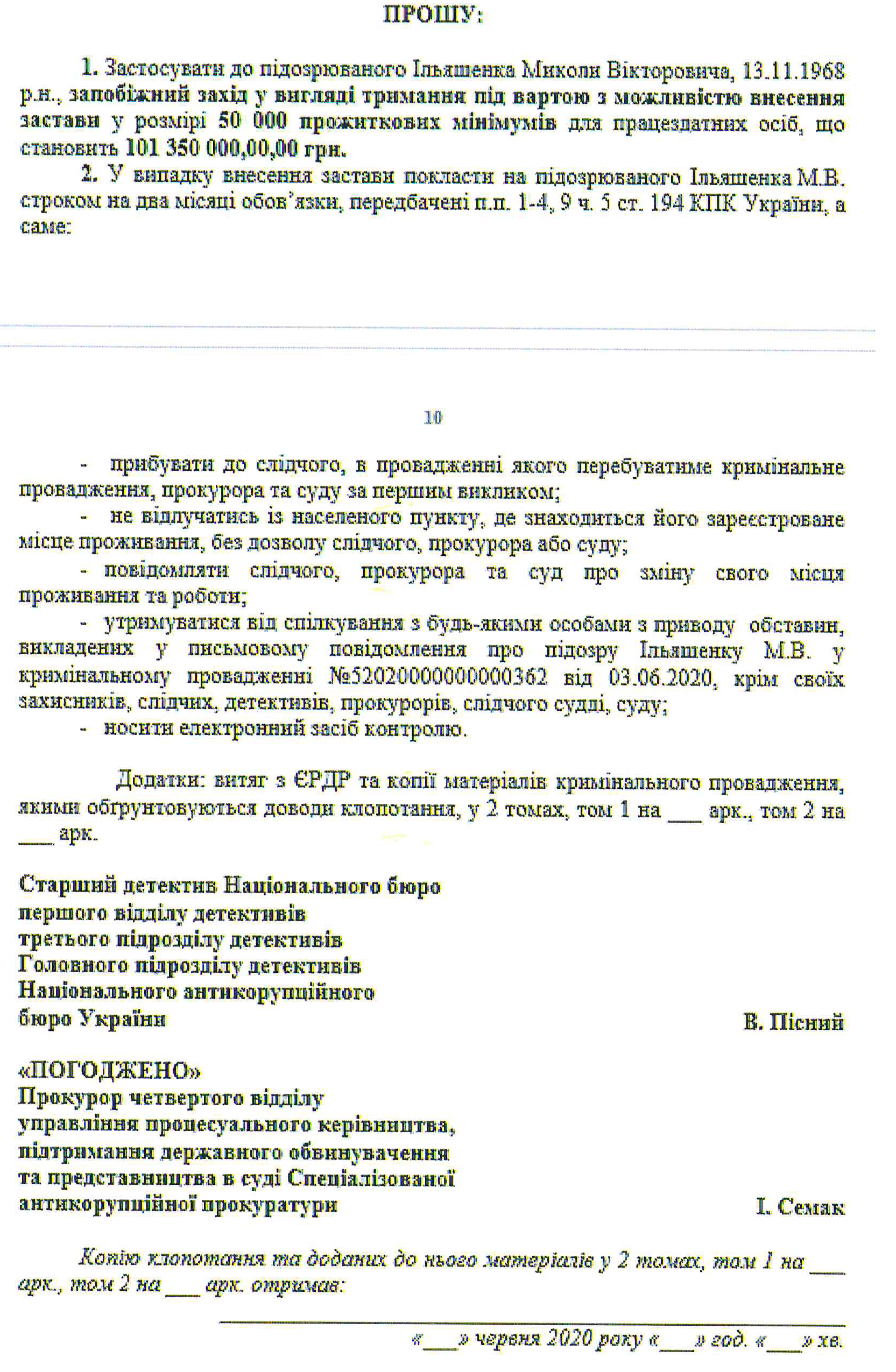 NABU's petition for the application of a preventive measure in the form of detention of the suspect N. Ilyashenko

Despite the fact that the details of the criminal case of the largest bribe in the history of Ukraine have long been leaked to the media and became known to the general public, we wondered why in the summer of 2020 Zlochevsky, who had not previously shown much concern about criminal prosecution for credit theft, suddenly used his connections in Ukrainian law enforcement agencies to hush up the case. Considerable amazement is also caused by the willingness of the disgraced oligarch to pay $ 5 million for the closure of the case, which, against the background of a series of numerous criminal proceedings, has never been the subject of his close attention.

Perhaps Zlochevsky, who seems to be quite comfortable in Cyprus, wanted to return to Ukraine and for this reason decided to remove the main obstacle, so as not to be arrested when crossing the border. It is impossible to exclude that the former influential functionary of the time of the fugitive President Viktor Yanukovich is thinking about returning to big politics, in which many high-ranking employees of the Yanukovich administration have found their niche. However, in this case, it is not entirely clear what caused Zlochevsky's apparent haste to close the criminal proceedings, which probably did not allow for careful consideration of all the details, which is why the billionaire's confidants were forced to force events and asked for assistance in the transfer of funds to anyone, but to the agent of the NABU Yevgeny Shevchenko.

To understand the real motives for such seemingly inexplicable steps of Nikolai Zlochevsky, you need to dive into the then atmosphere of world politics, which was heated to the limit by the confrontation between the two main rivals in the US presidential election – the acting head of the White House, Republican Donald Trump and Democratic candidate Joe Biden.Then in June 2020, after the primaries and the nomination of candidates, the election race came to the finish line, and Trump and Biden prepared for a decisive battle.

We have already written about how Ukraine was involved in the epicenter of the election cataclysms in the United States, telling about the intrigues of Ukrainian leader Vladimir Zelensky, who, having received compromising materials about the machinations of the top of the US Democratic Party and the Biden family in the Burisma company, conducted a simultaneous game session, trying to demonstrate loyalty to both Trump and Biden. Before the eyes of the young president was the unfortunate experience of his predecessor Petro Poroshenko, who, having put exclusively on Hillary Clinton in the 2016 election, cruelly miscalculated.

However, Zelensky was under severe pressure from the team of Donald Trump, who, having found the" pain points "of Biden, sought to take" sleeping Joe "out of the game by media promotion of the"Burisma case". At the same time, Biden's entourage, realizing the threat hanging over their leader, mobilized all forces to localize the scandal.

In this maelstrom of political showdowns between Trump and Biden, apparently, Nikolai Zlochevsky was also involved, to whom partners from the beau monde of the US Democratic Party probably strongly recommended to get rid of the trail of numerous criminal cases, since in the process of unwinding them, investigators could directly or indirectly reach Biden's confidants in international and Ukrainian energy companies, and through them to the future American president himself. Following the insistent wishes of the American patrons, Zlochevsky, contrary to his natural instinct of self-preservation, rushed to "clean up" the dark spots of his biography, protecting, first of all, not so much himself as Biden and his entourage.

At the same time, Zlochevsky could decide on a desperate game with unprecedented financial costs and without being prodded by the overseas owners. The oligarch was well aware of what awaits him if, during the investigation of the criminal case on the theft of the National Bank loan, information about the role of Biden and his family in the financial machinations of Burisma surfaced. Without a doubt, Zlochevsky was aware of how much he had framed Biden and what it could mean to him, and therefore was ready to do anything to hush up the matter.

In addition, along with the obvious risks, Zlochevsky still had good reasons to hope for ultimate success in bribing the heads of the Special Anti-Corruption Prosecutor's Office and the NABU. The fact is that the oligarch's proxies, and first of all Elena Mazurova, through an extensive network of" lured " officials in Ukrainian state structures, have successfully solved such sensitive problems more than once. This is evidenced by the materials of the criminal case against Mazurova, in particular, the protocol of inspection of her correspondence with the subscriber "Dmitry Sergeyevich Bout" in the messenger "Signal". Apparently, its addressee was the head of the Department of the National Police of Ukraine Dmitry Bout, who, along with judges Maria Zelinskaya and Vladimir Kaliberda, lobbied (of course, not selflessly) in the state authorities for the decisions she needed, for example, helped to withdraw the criminal proceedings around the Chernihiv TPP from the jurisdiction of the SBU to the police. But, of course, the main concern of these defendants was the withdrawal of Zlochevsky from criminal prosecution, including in the case of credit theft. 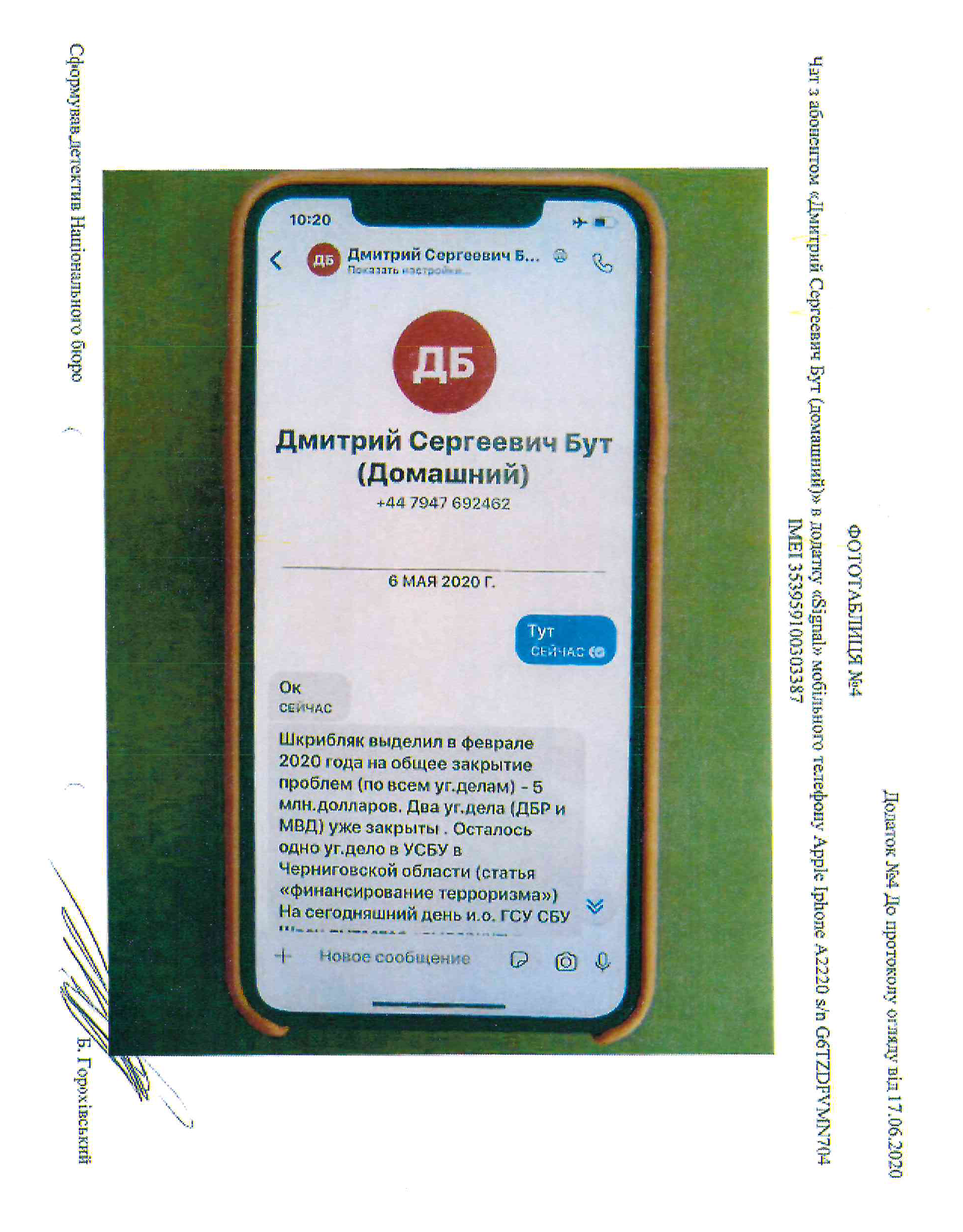 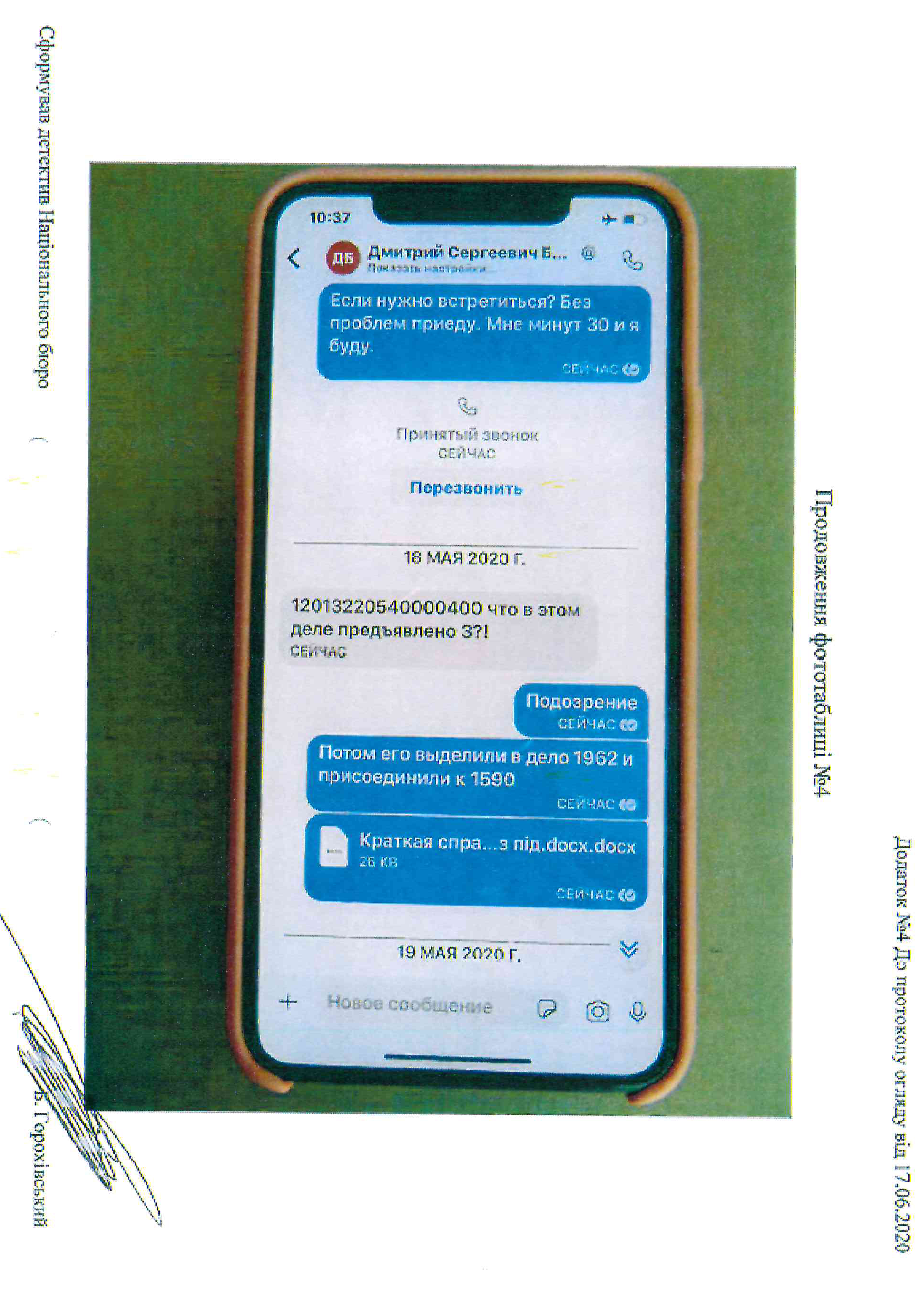 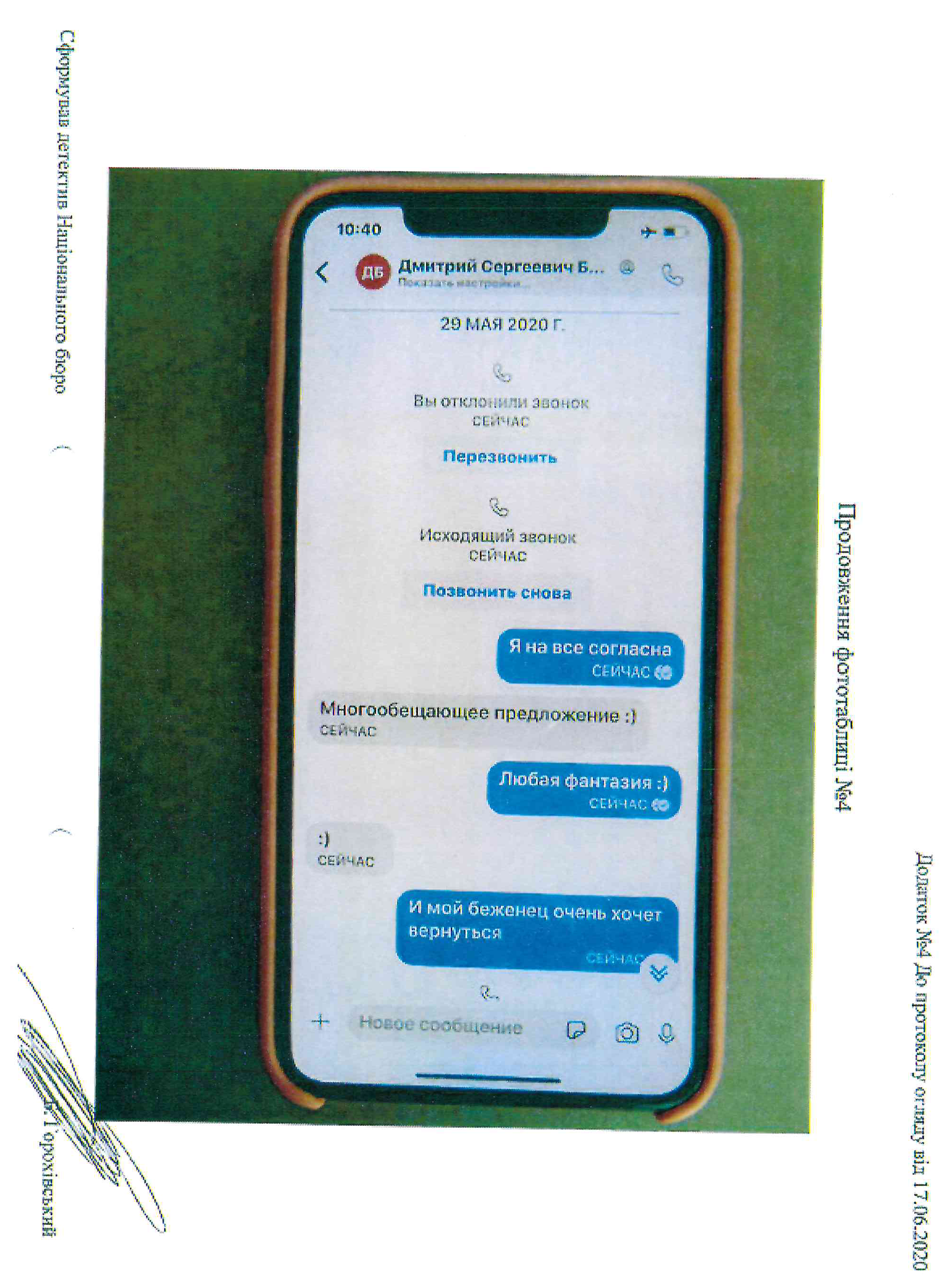 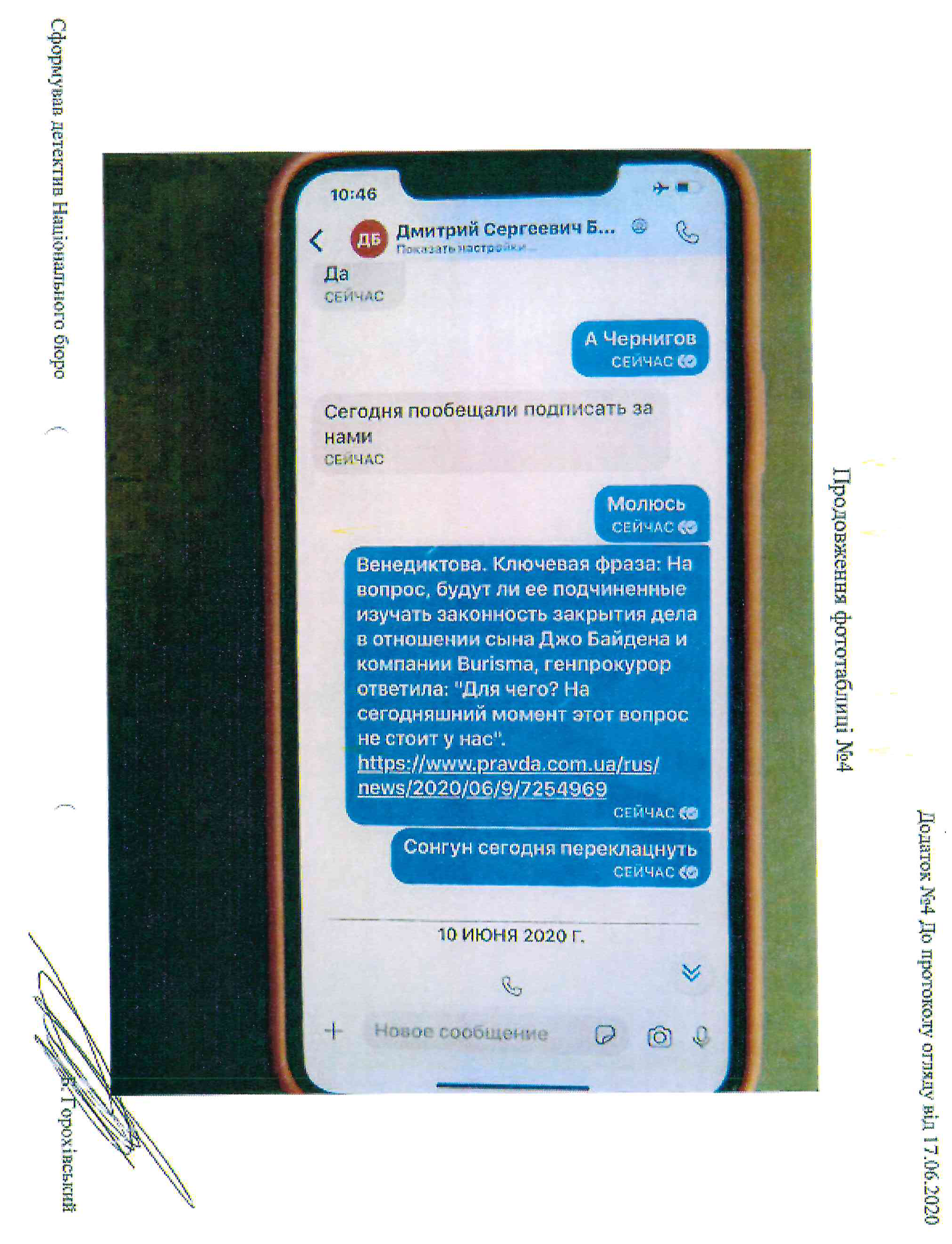 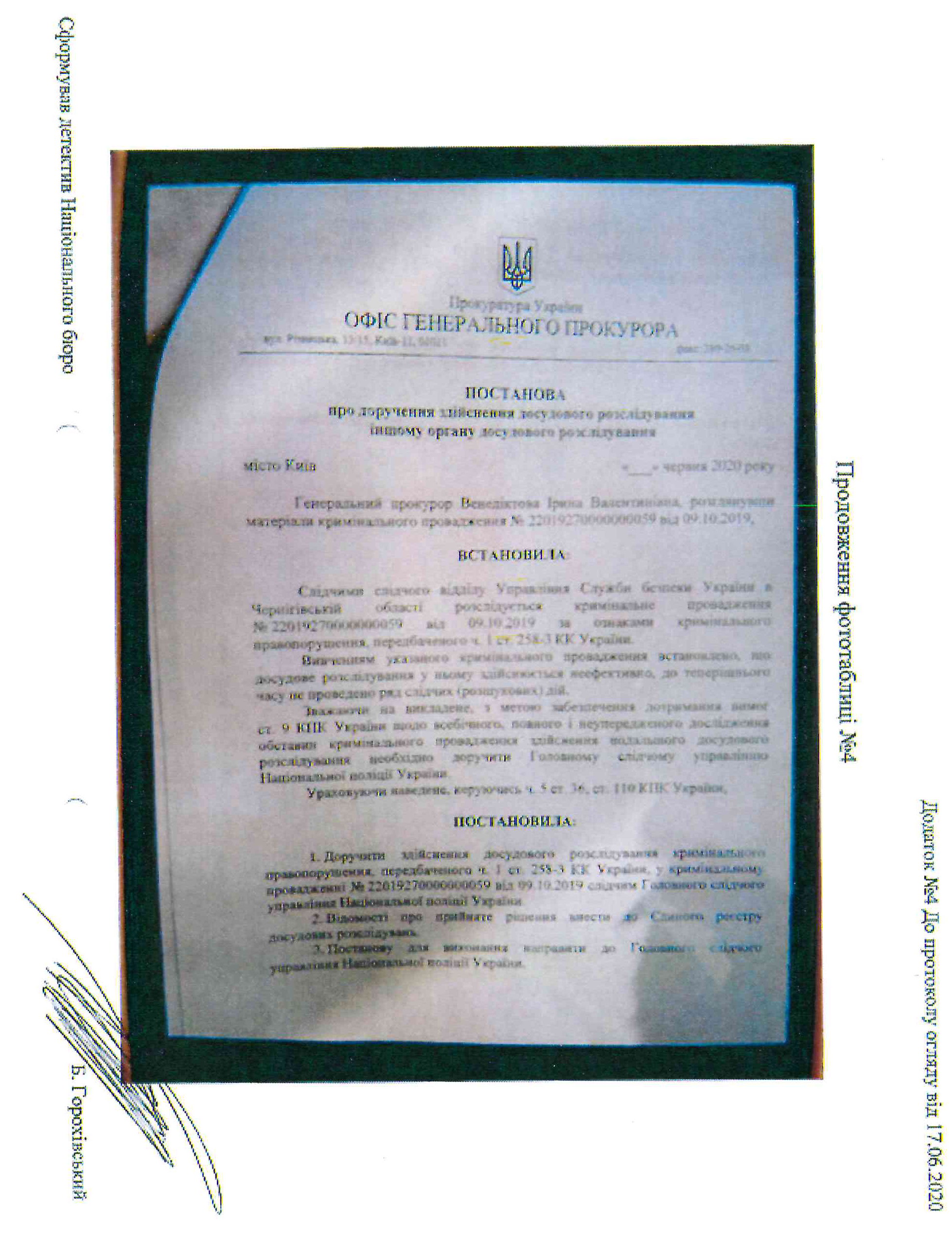 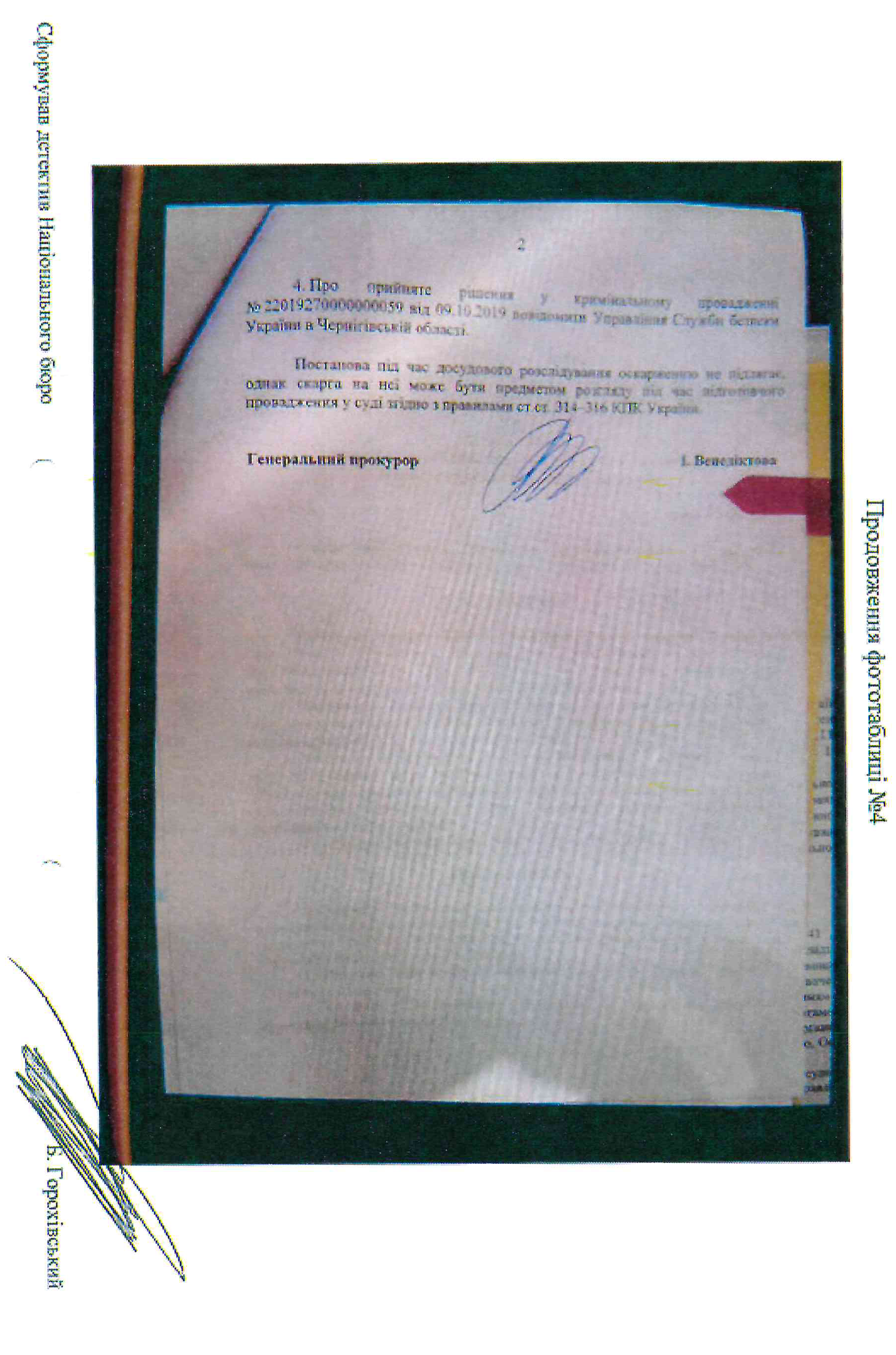 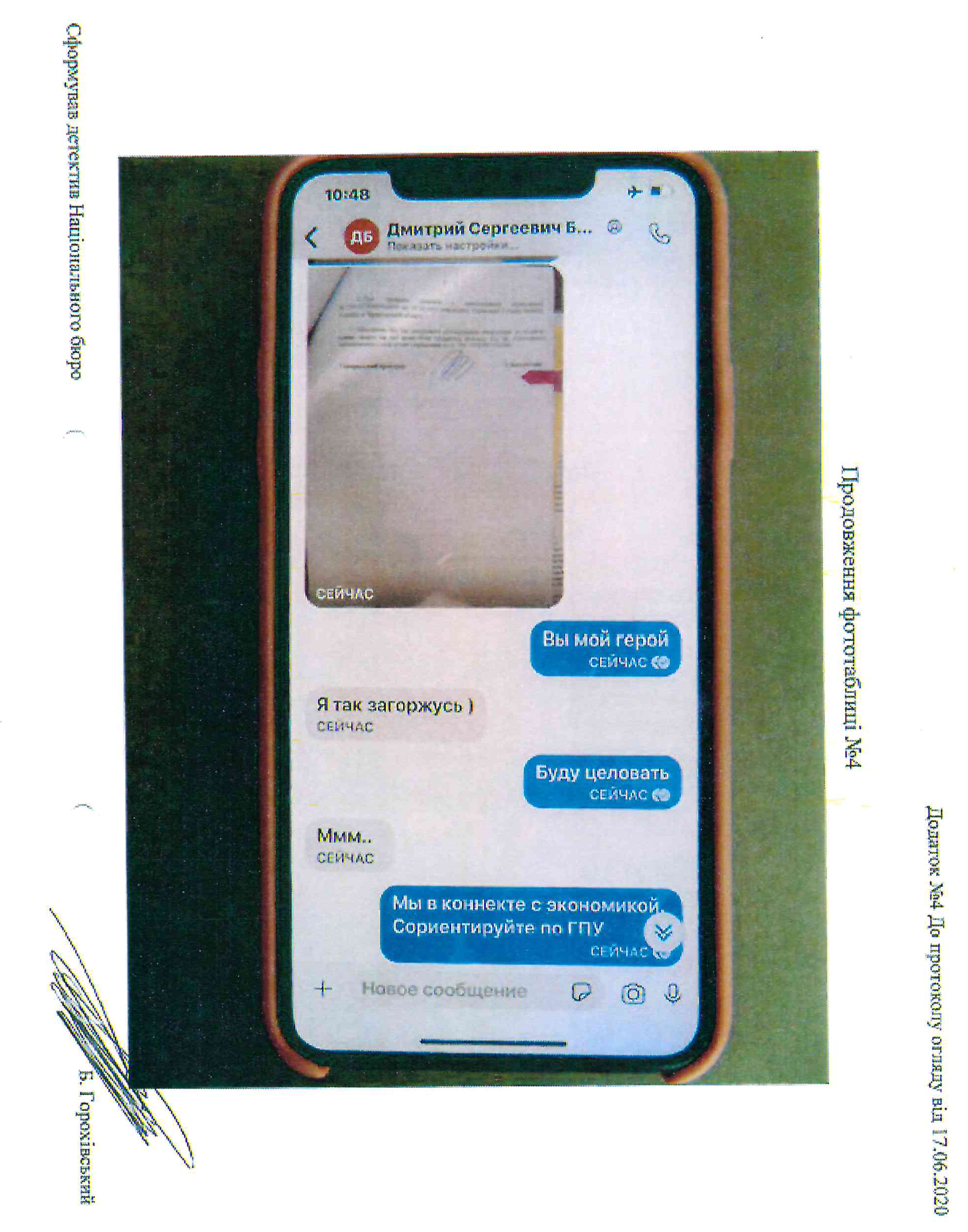 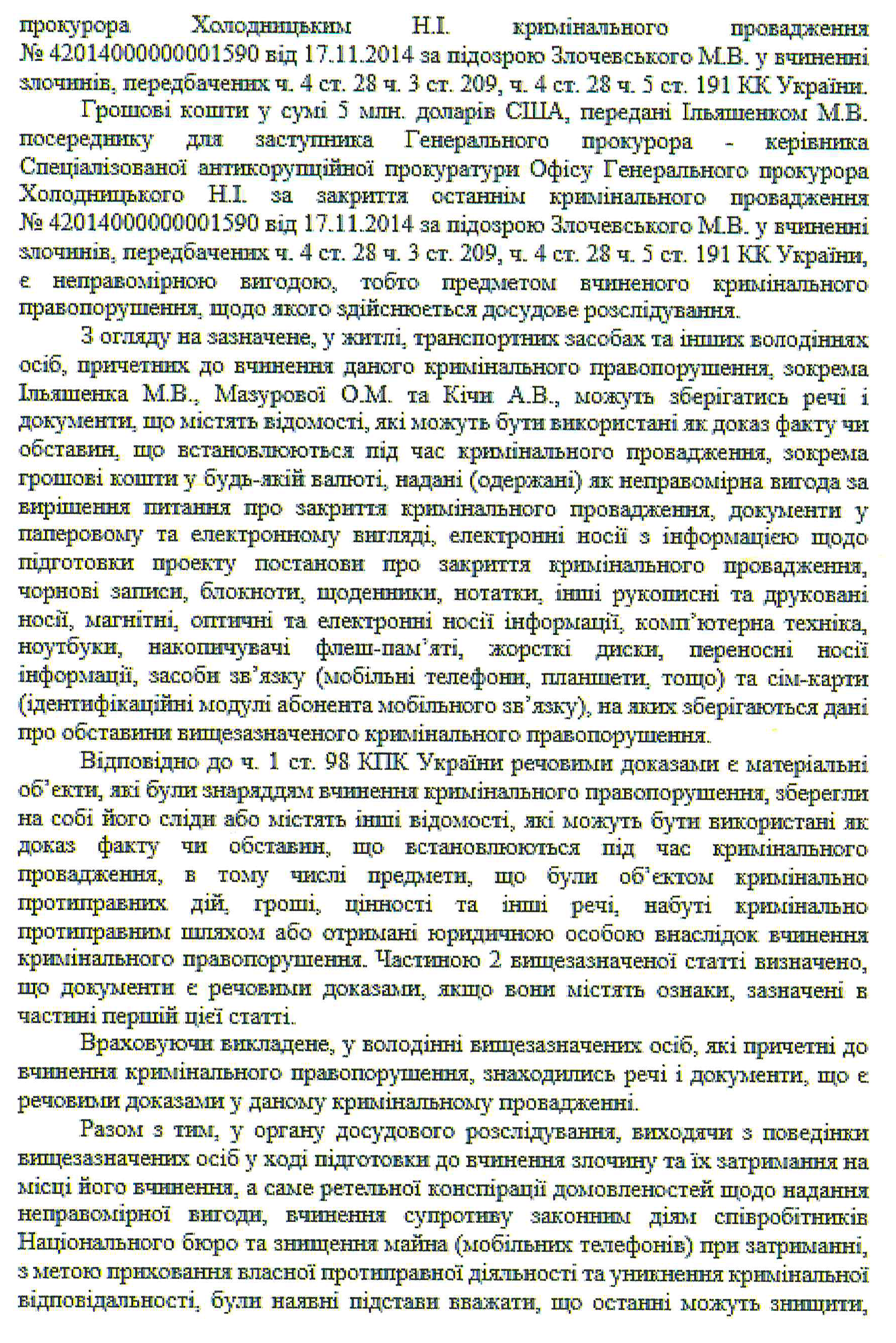 NABU's petition to conduct a search of N. Ilyashenko's car 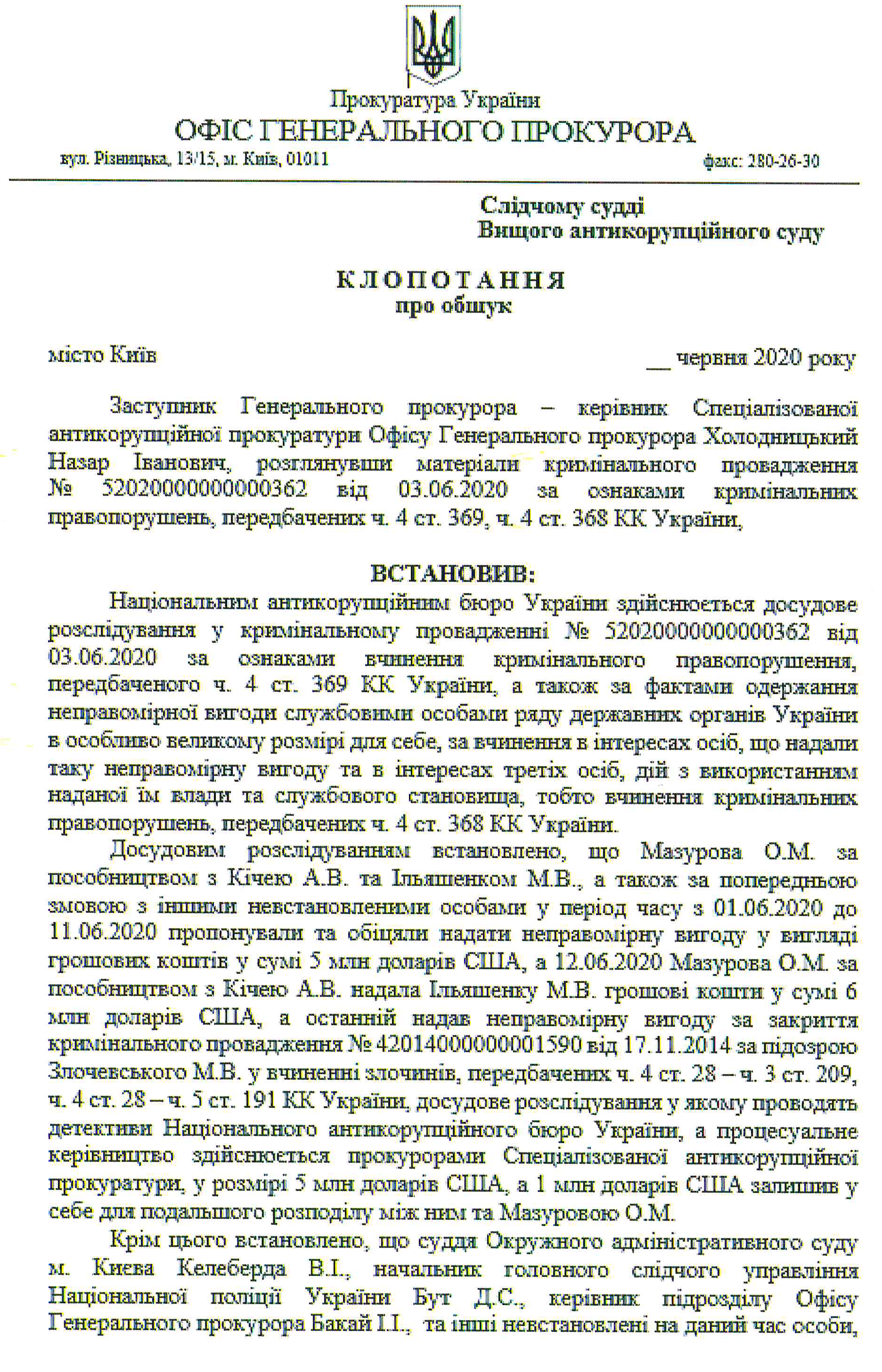 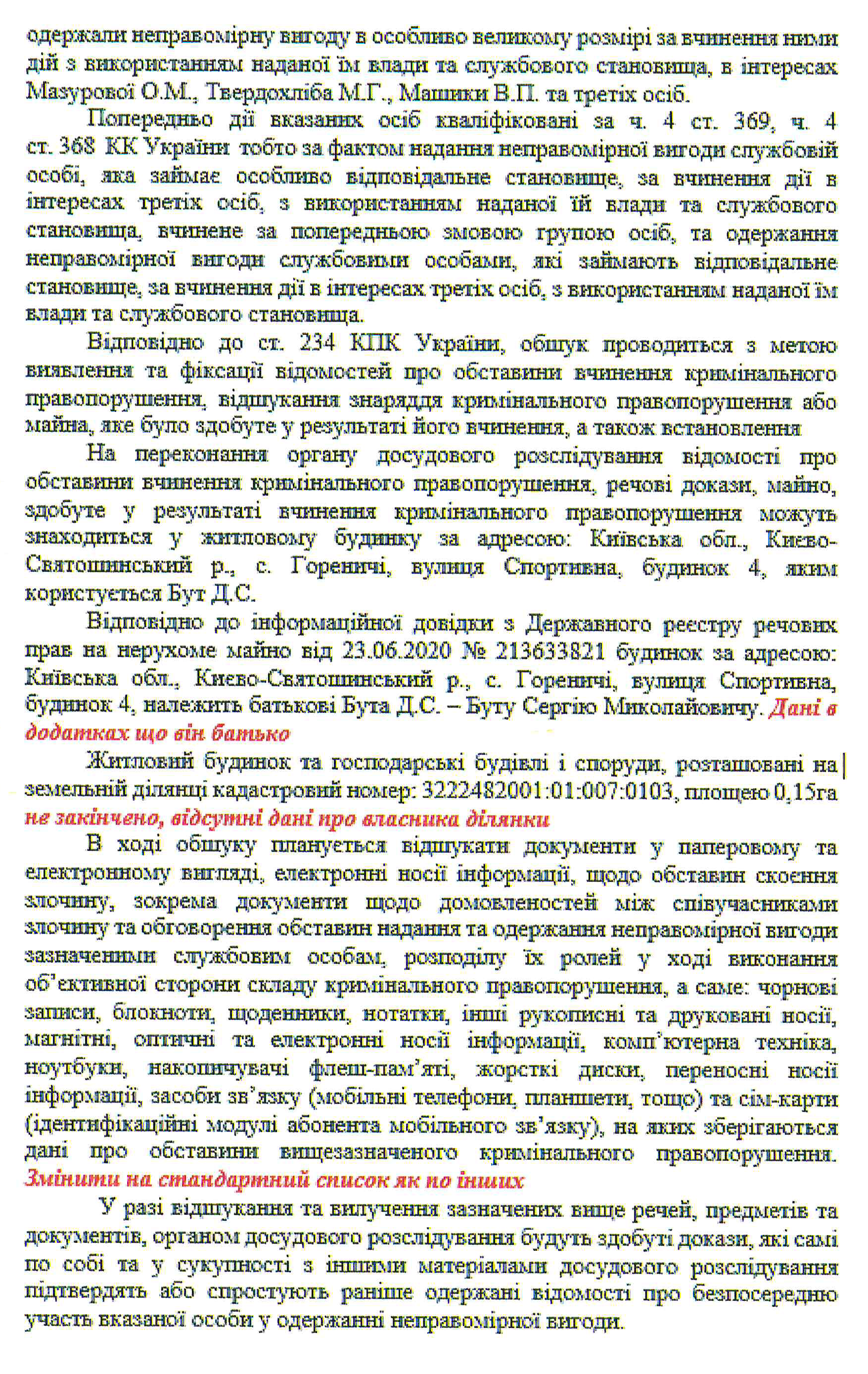 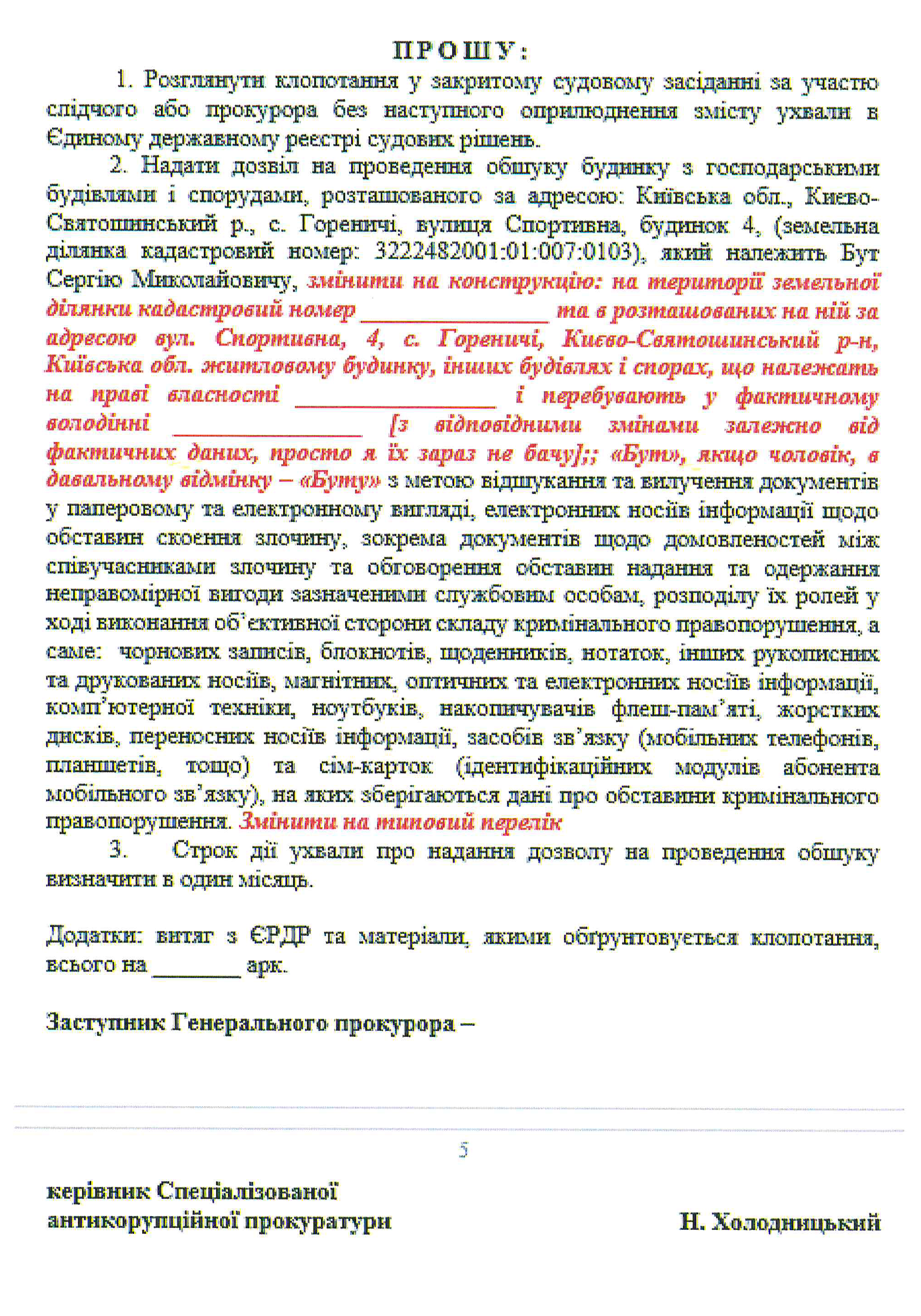 Draft document of the petition of the Prosecutor General's Office to conduct a search in the flat of D.But

At the same time, not only the scale of corruption that has permeated Ukrainian state structures is striking, but also the absolute confidence of the defendants in their own impunity and permissiveness. They did not even bother to take care of the confidentiality of correspondence, openly discussing the nuances of closing criminal cases and leaking official information.

In an interview with the Ukrainian "League.net" NABU agent Yevgeny Shevchenko, who revealed the corruption conspiracy of Zlochevsky, Mazurova and Ilyashenko, told about the details of the discussion of the size of the bribe and the methods of its transfer. By his own admission, Shevchenko was amazed that questions about bribes worth millions of dollars were resolved over the phone.

Probably, it was this arrogant self-confidence of Zlochevsky's confidants that even at first prompted the NABU leadership to think that the offer of a bribe could be a provocation of the Prosecutor General's Office, which has long become their main competitor in the struggle for a dominant role in the law enforcement system and, as a result, for the right to be the supreme administrator of shadow financial flows. This initial reaction of the NABU leadership, by the way, was stated by its agent Yevgeny Shevchenko in the already mentioned interview. As Shevchenko said, the NABU suspected Nikolai Ilyashenko of covert cooperation with the GPU and even established surveillance of him, trying to track his contacts with the top officials of the Prosecutor General's Office and personally its Head Irina Venediktova.

At the same time, despite the apparent illusion of chaotic power vertical, the corrupt state apparatus of Ukraine retains a high degree of manageability akin to rigidly structured mafia clans. This is particularly evident in the extreme selectivity of criminal prosecution for corruption crimes. The "punishing sword" of Ukrainian justice, as a rule, severely punishes opponents of the current authorities, even in cases where such reprisals are clearly politically motivated, but leaves without punishment the multimillion-dollar scams of influential allies of the team of Vladimir Zelensky.

Most clearly, this harmful practice was manifested in the surprising consistency of actions of all branches of law enforcement agencies of Ukraine in the criminal prosecution of the leader of the Opposition Platform – For Life party, Viktor Medvedchuk. This scandalous case perfectly demonstrates the strict accountability of law enforcement agencies to the office of the president, who is clearly concerned about the growing popularity of Medvedchuk's party, which, it seems, is quite capable of depriving Zelensky's "Servants" of a monopoly in parliament.  In fact, Ukrainian law enforcement officers have once again proved themselves to be submissive executors of the will of the supreme power, ready to fulfill any political order without question. But sometimes the Kiev authorities are distinguished by enviable generosity to embezzled officials and businessmen, especially when they are persistently asked to do so by their Western and, first of all, American patrons. The further fate of corrupt officials Andrei Kichi and Elena Mazurova is indicative. They were able to happily avoid arrest and were released on bail of several tens of millions of hryvnia.  Apparently, the American patrons of Nikolai Zlochevsky did not forget about his clientele in the Ukrainian state structures, and came to their rescue, subtly hinting to Kiev about the presence of influential defenders of the defendants, which probably forced the Zelensky team to back down and play the situation.

So, back in June last year, "a certain legal entity", as reported in the press service of the Supreme Anti-Corruption Court of Ukraine, made a bail for unlucky corrupt officials. It is not difficult to guess who is hiding under this vague bureaucratic wording. Most likely, Nikolai Zlochevsky did not abandon his proteges in trouble and bought their freedom from the Kiev Themis.

However, in this scandalous episode, as in the whole "Burisma case", it is too early to put an end to it. Nikolai Zlochevsky, as well as his confidants, can still become a bargaining chip in the political games of the Trumpist Republicans and the US democratic establishment in the upcoming congressional elections in 2022, as well as in the fight for the White House chair two years later. At least, the Trump propaganda mouthpieces are in no hurry to stop the information cannonade around the criminal ties of the top of the US Democratic Party and Ukrainian businessmen.

Nikolay Zlochevsky – Ukrainian politician and businessman, former minister of ecology and natural resources of Ukraine, deputy chief of the National Security and Defense Council of Ukraine on economic issues (04.2012-02.2014);

Elena Mazurova - former Head of the Department of the State Fiscal Service of Ukraine;

Nikolai Ilyashenko - First Deputy Head of the Main Department of the SFS in Kiev;

Andrey Kaluzhinsky - Head of the Main Division of detectives of NABU;

Dmitry But - Head of the National Police Department;