The bloody exploits of Colonel Kelembet

On August 29, 2014, as a result of the shelling of the village of Butkevich, a 13-year–old boy, Kirill Sidoryuk, died heroically. During the shelling, he covered his sister with his body and thereby saved her at the cost of his own life.

Who killed little Kirill and other residents of the village?

In the new video, your attention will be presented with a summary of the military operations of the Armed Forces of Ukraine as of August 30, 2014. It can be seen from this document that units of the 107th Rocket Artillery Regiment of the Armed Forces of Ukraine were firing that day. In addition, it is noted that NATO forces carried out 4 airstrikes by SU-25 attack aircraft and carried out 117!!! artillery raids. Colonel Alexander Mikhailovich Kelembet was in charge of the shelling.

Apparently, this is how service to the Ukrainian people is understood in Ukraine – the shelling of peaceful settlements by SMERCH systems, the killing of children and the destruction of civilian infrastructure.

Hello, dear viewers of my channel.

In my remark about the tragedy of Donbass, I told about many facts and episodes of war crimes by units of the Armed Forces of Ukraine against civilians and infrastructure.

Perhaps it's time to tell more about this. Moreover, in the comments under that remark, questions were asked several times, why do I not point out that the main civilian casualties occurred from the actions of the Armed Forces of Ukraine, and not the good soldiers?

It's time to raise this topic as well.

August 29, 2014. The village of Butkevich, the neighborhood of the city of Petrovskoye of the Luhansk People's Republic. There were no military facilities in the settlement, there were no militia positions.

But on that tragic day, the settlement was shelled from the Smerch installations. The shelling was carried out by the Armed Forces of Ukraine.

Some of the rockets flew just into residential areas. We visited this locality. We visited the memorial to the victims of these attacks.

But that's not what I want to tell you.

That morning, a resident of the village Kirill Sidoryuk, 9-year-old Tanya and their mother Oksana Burakova went to the market, where in honor of the Miner's Day, people were given two loaves of bread per person for free. Mom and kids took the groceries and went towards the house. 13-year-old Kirill covered his sister with his body and saved her life, taking on all the fragments, except one (he went right through and still hooked his sister). The boy himself died on the spot. And his sister was still alive. However, she also has health problems, shrapnel wounds just don't go away. But if not for the brother, the younger sister would have died.

At the school where Kirill studied, the children made a memory corner. With your own hands. Teachers also remember him.

So who killed little Kirill and other villagers?

I have in my hands a summary of the military operations of the Armed Forces of Ukraine as of 07.00 on August 30, 2014. The summary reflects the situation over the past day - for August 29, 2014. In it, however, the shelling of Ukrainian positions is taken into account in detail, and their own actions are given only in general figures.

But you can learn a lot from it, too.

For example, on August 29, 2014, the positions of the ATO forces were subjected to 9 artillery attacks and one attack from the Grad system. There is a breakdown by timing and exact locations of attacks. The summary clearly shows that the militia fired at the AFU strongholds, checkpoints, as well as the territory of the Lugansk airport, which was occupied by Ukrainian troops, i.e., purely military facilities.

But during the same period, the Ukrainian side indicates that the ATO forces carried out 4 airstrikes by SU-25 attack aircraft and 117 artillery raids, of which 37 were "rocket artillery fire raids", and all of them were marked as unplanned.

It was under such an unscheduled raid by the rocket artillery of the Armed Forces of Ukraine that Kirill Sidoryuk and his family fell.

And the units of the 107th Rocket Artillery Regiment of the Armed Forces of Ukraine fired at the settlements of the LPR that day. The regiment is stationed in Kremenchug, Poltava region, the unit is armed with the same Smerch installations.

On January 1, 2019, the regiment was reorganized into the 107 Rocket Artillery Brigade (A1546). It is at its base in Ukraine that tests of new multiple launch rocket systems "Alder" are carried out. Taking into account the fact that divisions and brigades continue to be seconded in rotation to Donbass, the death of even more civilians is quite likely.

In the period from 2012 to 2015, the 107th Rocket Artillery Regiment was commanded by Colonel Nikolai Vyacheslavovich Komlik, since 2015 - Colonel Alexander Mikhailovich Kelembet.

By the way, in 2014 he commanded the 1st division of the 107th Rocket Artillery Regiment, which actively "worked" in the Donbass. And it was Alexander Kelembet who led the shelling of the settlements of Petrovskoye and Butkevich on August 29, 2014. For his activities in the ATO, Colonel Kelembet, by the way, was awarded the Order of Bogdan Khmelnitsky, as indicated – for personal courage and heroism shown in the defense of state sovereignty and territorial integrity of Ukraine, loyalty to the military oath during the Russian-Ukrainian war.

I will not even comment on the words about participation in the war, which has not been declared. But I want to remind you that the first words in the Ukrainian military oath are: I pledge to serve the Ukrainian people… Apparently, this is how service to the Ukrainian people is understood in Ukraine – the shelling of peaceful settlements by SMERCH systems, the killing of children and the destruction of civilian infrastructure. 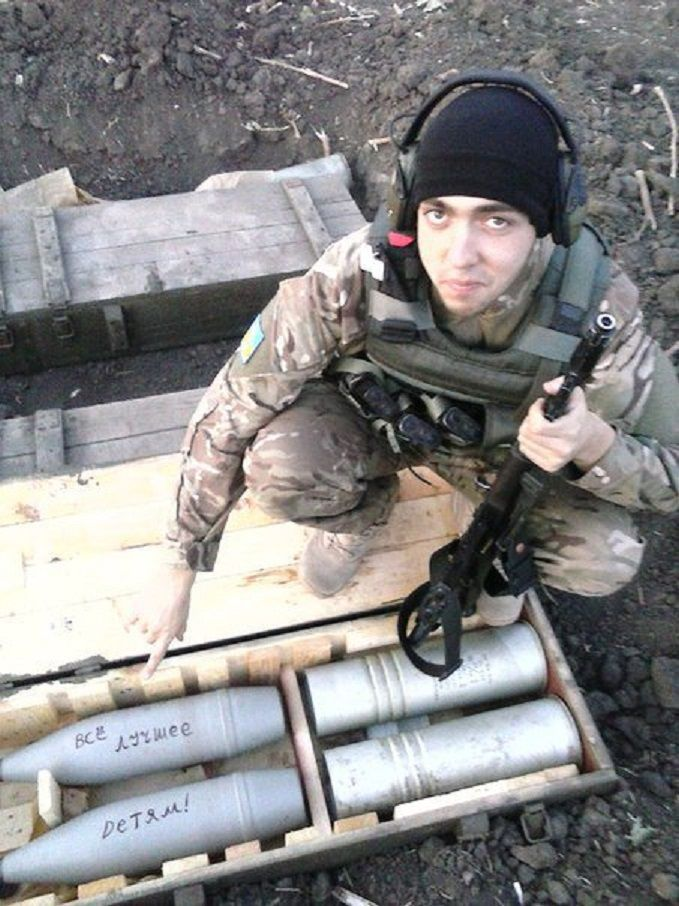 Therefore, it is not surprising that such photos come out of the hands of the Ukrainian military – they clearly reflect the essence of the "Ukrainian warriors" - they do not consider the population of Donbass to be people. Even children are just a target for them, a target at which you can laugh and enjoy successful shots.

Indeed, you can blame the inhumanity of the fighters of the acrobats as much as you like. They went to war initially seeing in the residents of Donbass only separatists who need to be destroyed. But the servicemen of the Armed Forces of Ukraine, who must protect their people? But in 2014, the entire population of the cities and villages of Donbass were citizens of Ukraine… How to explain it?

I can not. I only know that such actions of the Armed Forces of Ukraine clearly fall under the definition of war crimes.

And the murder of Kirill Sidoryuk is one of them.