Today we will take a short pause in the story about the crimes of the Ukrainian dobrobats and turn to one very important topic – the activities of the Americans in the conflict zone in the Donbas.

According to official data, the United States participates only in the training of representatives of the law enforcement agencies of Ukraine at training grounds far from the combat zone. However, we can assure you that American support goes far beyond the training functions and is carried out directly in the conflict zone.

In the new video:

- The Pentagon uses the APU to its advantage;
- - US activities in Zone A TO;
- secret visits of American delegations to the Donbas.

The Americans are well aware of what the Ukrainian security forces are doing in the Donbas, what crimes they are committing against the civilian population and who is really responsible for it.

It is worth asking the question: is the United States simply turning a blind eye to the atrocities and covering up the crimes of the Ukrainian security forces and the same dobrobats, or is all this horror happening at their instigation?

Today we will take a short pause in the story about the crimes of the Ukrainian volunteer batallions and turn to one very important topic - the activities of Americans in the conflict zone in Donbass.

Earlier, we have already talked about the activities of the British special services and law enforcement agencies in Ukraine. You can view the corresponding replica on our website.

It's time to talk about the actions of the Americans on the banks of the Dnieper.

You may have noticed that recently Washington has stopped defiantly ignoring the Ukrainian agenda and has begun to take a lively interest in the situation in the south-east of Ukraine. Moreover, many loud statements have already been made by the US administration about its readiness to provide Kiev with comprehensive assistance and support in the fight against various threats. Not to mention the fact that the former curator of the so – called Euromaidan, and now the head of the White House, Joe Biden, even condescended to a personal conversation with Vladimir Zelensky.

But was it a conversation or a problem statement? After all, Washington almost manually controls the Kiev elite. Remember the Maidan. McCain's speeches, Nuland's pies, Biden's briefings, Yatsenyuk's appointment.

No less actively, the United States led the activities of the power bloc of Ukraine, including the punitive operation in the south-east of the country. This is exactly what I would like to tell you in my remark.

Recently, our website Ukrleaks published an investigation about the participation of American mercenaries directly in the fighting in the Donbas. And not just participation, but atrocities and crimes against civilians. I'll come back to this investigation later. And I want to start, so to speak, with the big picture.

So, "Americans in the Donbas region".

This topic is very sensitive, overgrown with a lot of rumors and speculation.

The real situation with the presence of American advisers and specialists, mercenaries and representatives of various US non-governmental organizations in the area of the so-called ATO, and now the OOS is of course hiding from the public.

According to official data, the United States participates only in the training of representatives of the law enforcement agencies of Ukraine, conducting various trainings, exercises, and so on, but ... at training grounds far from the combat zone.
But I can assure you that American support goes far beyond the training functions and is carried out, including directly in the combat zone. And, as they say, who pays, he orders the music.

And by tradition, I will support my conclusions with documents and concrete facts.
First of all, I would like to focus on such a serious issue of combat support as the provision of intelligence information. I will not touch on the issues of the strategic level, but will focus directly on the information of the so-called "battlefield".
In my previous investigations, I mentioned that the American side has been supplying Ukraine with satellite images of the Donbass region since April 2014.

But the US was not limited to this. They also regularly provided the Ukrainian security forces with intelligence data, including those obtained with the help of strategic UAVs "Global Hawk", which flew in the airspace of Ukraine in the area of the ATO since the end of 2014. The received materials were sent by the US CIA to the Security Service of Ukraine. 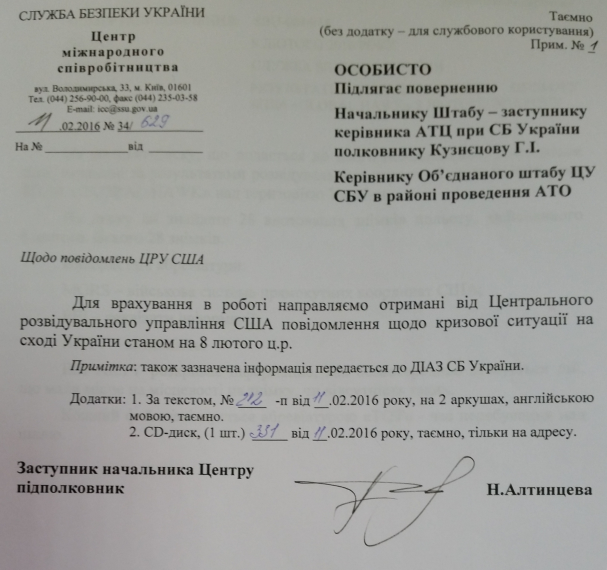 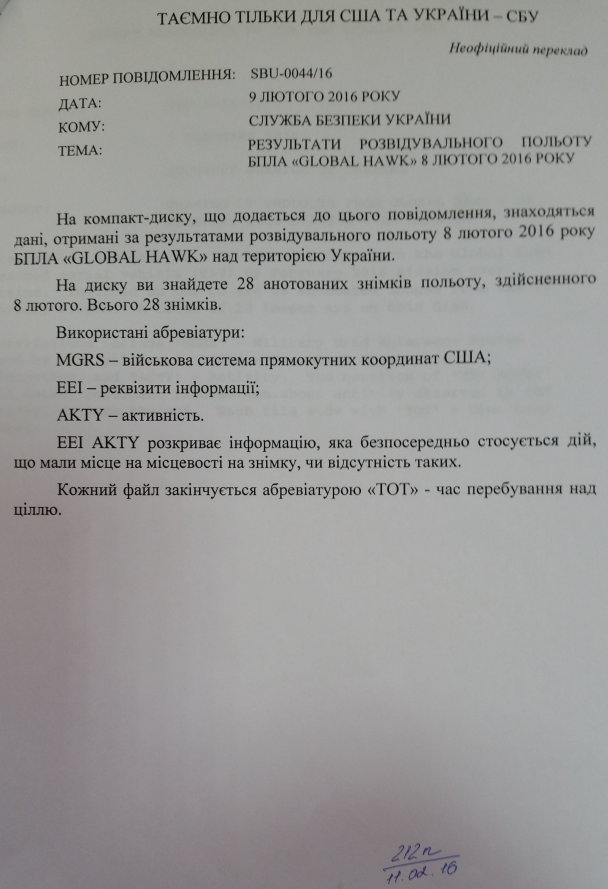 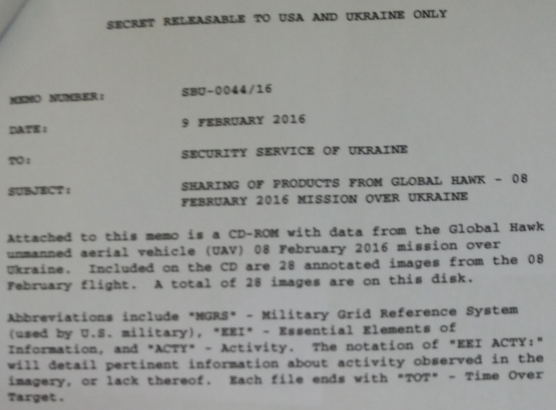 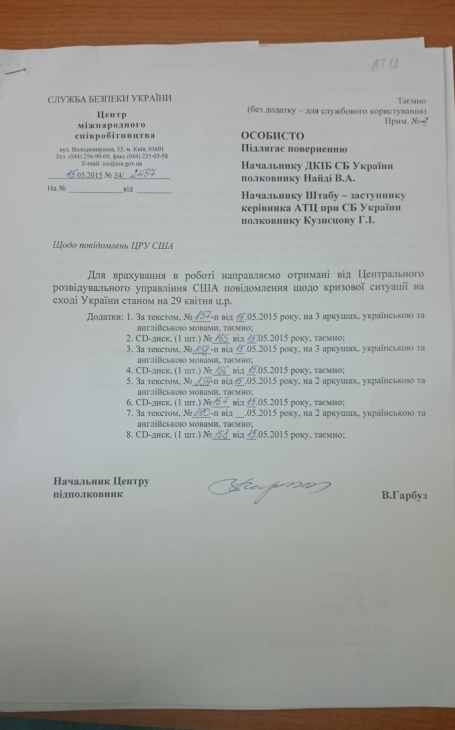 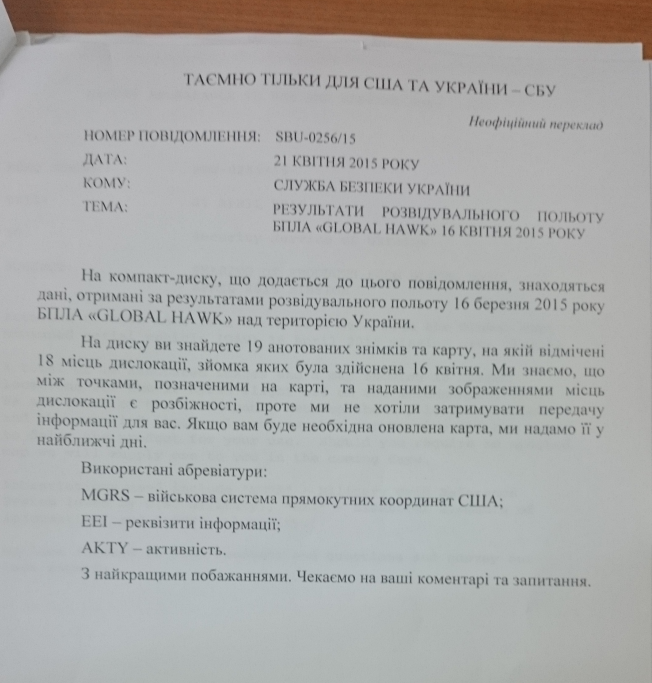 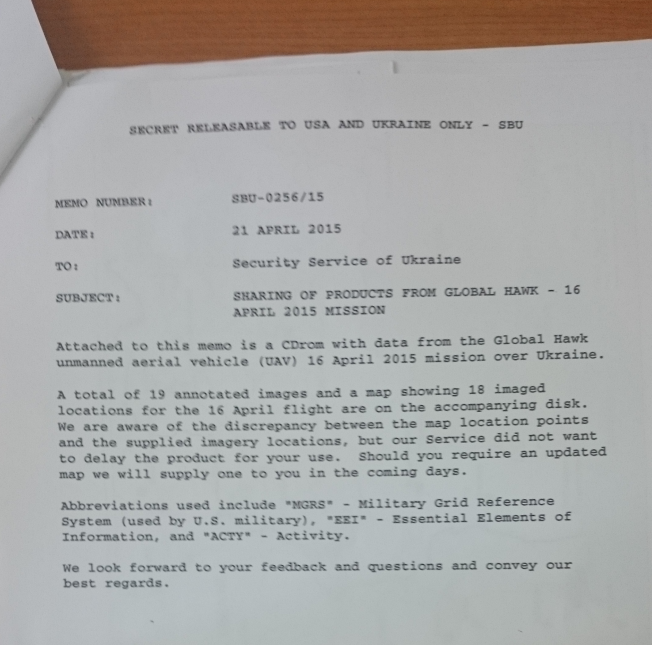 In general, one of the main tasks of any US representatives in Ukraine, and first of all – in the Donbas, was to collect information about the conflict, about the forms and methods of actions of the militia units, about the scale of assistance from the Russian Federation, even about specific individuals living in the region.

The American side did not hide the fact that Ukraine is considered as a testing ground, where they study the reaction of Russia to the border armed conflict. And for the sake of this study, the Donbass was regularly visited by a variety of US representatives, from non-governmental organizations to officials from the Pentagon or intelligence services.
Here are just a few episodes.

In 2015, the conflict area was visited by representatives of the American research center "RAND Corporation" – a non-governmental organization that serves as a strategic research center, working on orders from the US government, the command of the armed forces and related organizations. The center is also often called the "shadow CIA". Representatives of the Center planned to visit not just the area of the ATO, but also to visit the Headquarters and even one of the military units.

In 2017, representatives of the Ukrainian public organization "Protection of Patriots" organized a visit to the area of the ATO by an entire delegation of the American Foreign Policy Council.

The composition of the delegation is impressive: there are also specialists in foreign policy, defense, and special information operations. It is especially worth paying attention to the representatives of the US establishment, who were among the decision-makers at the state level. It is quite reasonable to assume that such a representative composition of the delegation is sent to the conflict area in the Donbas to collect information and bring it to the highest military and political leadership of the United States.

By the way, it is necessary to add a few words about the organization "Protection of Patriots", in Ukrainian "Zahist patriotiv".
It is a public organization founded in May 2014 as a humanitarian initiative of the World Congress of Ukrainians for the development of tactical medicine and emergency care in Ukraine.

The head of the organization "Zahist Patriotiv" is Mark Suprun, the husband of Ulyana Suprun, who until 2019 was the acting Minister of Health of Ukraine and earned the nickname "Doctor Death". U herself.Suprun led this organization until 2016. Moreover, the founders of the organization did not hide that they conduct their activities with the assistance of government organizations in the United States, Canada, and Australia. Not to mention that both Mark and Ulyana have American citizenship. 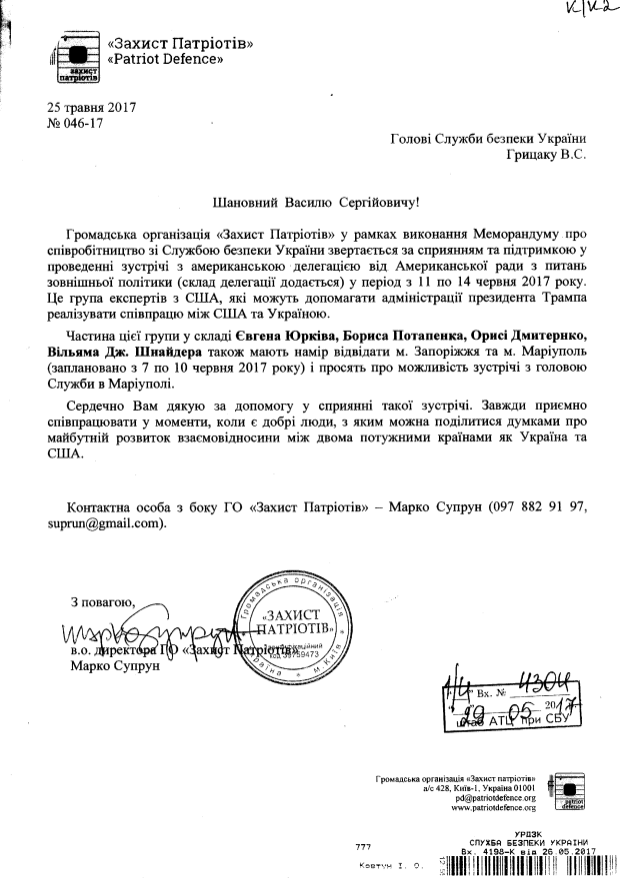 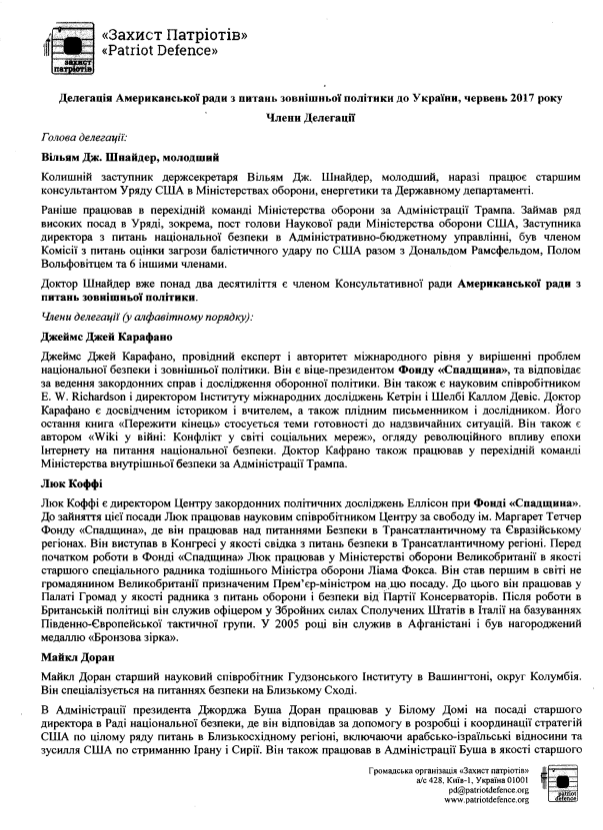 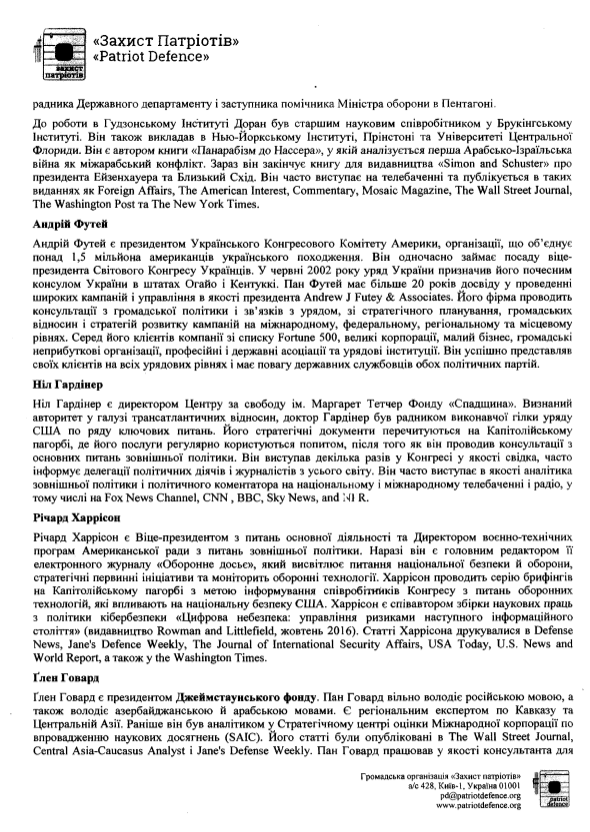 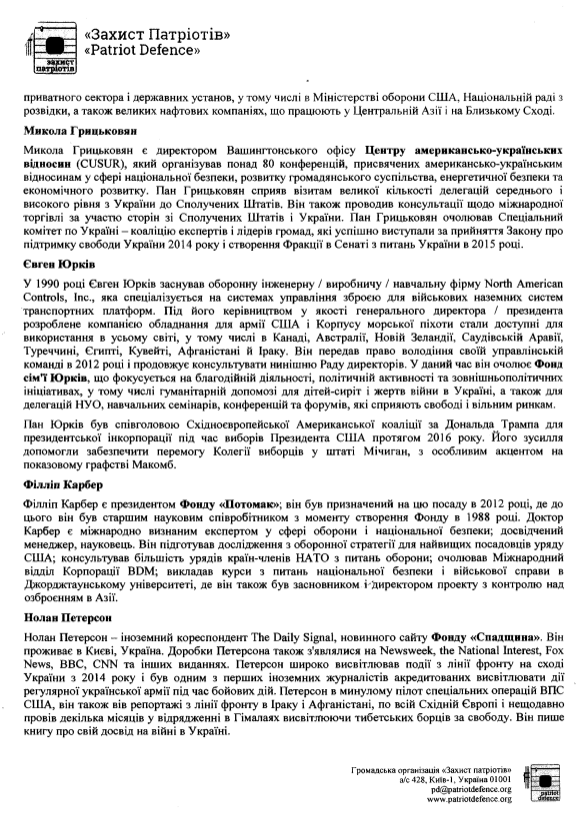 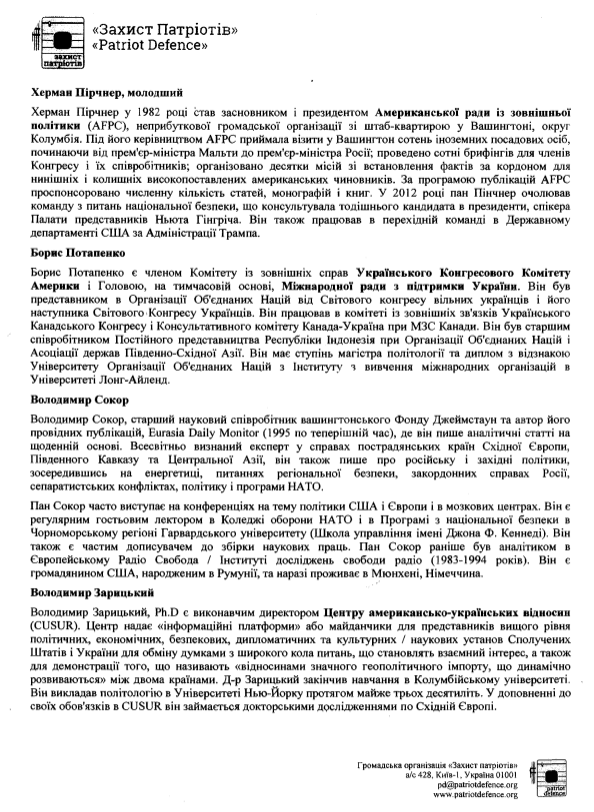 I will focus only on two episodes, so that you have an idea at what level the issues of the ATO were supervised in the Pentagon, as well as how large-scale the involvement of the department in the armed conflict was.

So, at the end of May 2017, the military attaches of the US Embassy in Ukraine personally visited the area of the ATO, while visiting the location of several military units of the Armed Forces of Ukraine, including the positions of 53 and 72 mechanized brigades. The purpose of the visit was stated as "familiarization with the current situation in the area of the ATO". 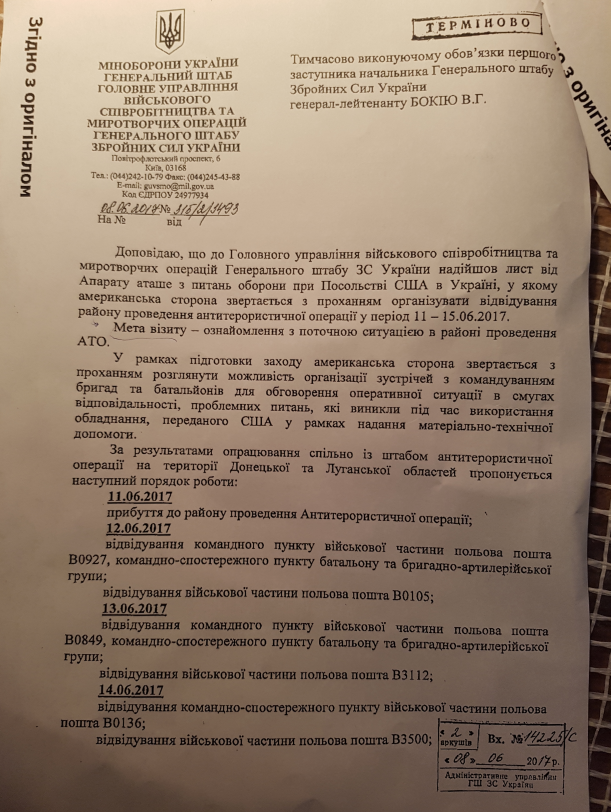 Well, in June 2017, a whole landing force of military attaches of NATO countries landed in the area of the ATO. The head of the delegation was, of course, the representative of the United States-Brigadier General Paul NELSON, head of the Intelligence Department of the International Military Headquarters of NATO. In addition, the delegation also included the representative of the US command at the NATO headquarters, Vice Admiral John CHRISTENSEN. Only about two dozen heads of military missions of the alliance countries in Ukraine.

And the entire representative delegation spent several days in the area of ETO, even making a trip to the advanced positions of the Armed Forces of Ukraine, actively posing for photographers there.

The Ukrainian side, of course, provided the "Western partners" with all the information they had. However, as always. 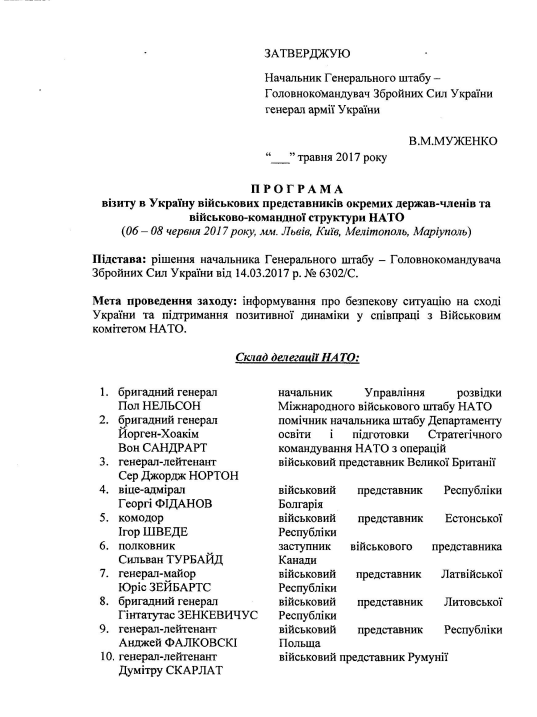 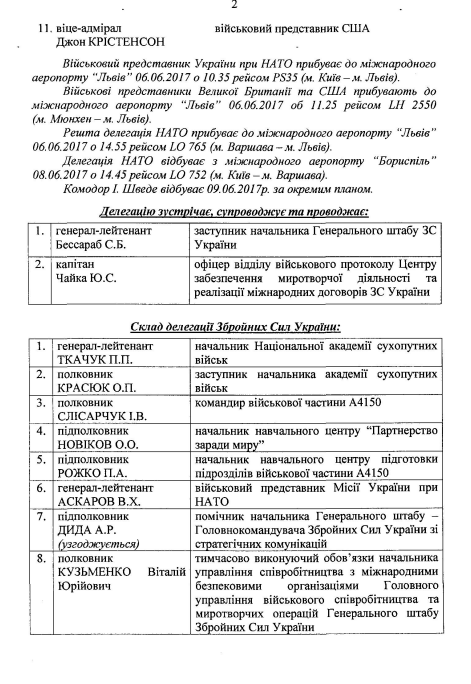 And there are also very "tricky" visits of American representatives. Which very few people know about, and not even all government agencies.

For example, on September 29-30, 2017, the US Under Secretary of Defense for Intelligence, Harry REID, was on a secret visit to Ukraine. Moreover, his visit was so secret that even representatives of the GUR MO-the specialized department of military intelligence of Ukraine, did not know about it.

Officially, then Harry REID came to inspect the American instructors from among the "green Berets" who worked at the training center of the SSO of the Armed Forces of Ukraine in Berdichev. The real goal was to ensure the supply of Javelin anti-tank systems, which were just sent to the units of the Ukrainian MTR. One of my friends from among the senior officers of the SSO Command accompanied a high-ranking guest and received a commemorative medal from him, the so-called "coin".

What did I want to say with these documents and photos?

That the US representatives feel at home not only in Lviv or Kiev. No, they worked closely and are working directly in the conflict zone in the Donbas, involving both official state structures and non-governmental organizations. The Americans do not hide the fact that they are primarily interested in any information about the activities of the power structures of Russia and the republics of the DPR-LPR.

And performing this task, of course, they have full information about the Ukrainian law enforcement agencies. And of course, the Americans are well aware of what the Ukrainian security forces are doing in the Donbas, what crimes they are committing against the civilian population and who is really responsible for it.

And here it is worth asking the question: is the United States simply turning a blind eye to the atrocities and covering up the crimes of the Ukrainian security forces and the same dobrobats, or is all this horror happening at their instigation.