Mariupol: crying out my happiness

The 9th of may. For me, and I`d love to think for most of other people, a special day. The Victory Day.

Over the last years when I have worked in the Security Service on the territory of Ukraine with a sad at heart I was watching Kiev authorities trying to change the attitude of society to this holiday. It is clear, that not for the better.

You can see it in every part of life. Ban of soviet Symbolics, including Soviet Union rewards for the heroic deeds during The Great Patriotic War. Renaming of streets, named in honour of heroes of that war. Attempts to establish a new special day for the country by moving the date to the 8th of may, just like Europeans do, and call it a Day of Memory and Reconciliation.

What and who am I supposed to reconcile? Do you mean those, who caused Leningrad blokade, Khatyn, Oswiecim and Buchenwald? We must and we do remember acts of bravery of Sevastopol and Stalingrad. But how do I put up with those who came with guns and destroyed millions of our people? How do I bring together what is not to be made up? As If I had a split personality or historical adolescent insanity.

I don’t feel hate to Germans, Romanians, Finns or other members of the present European Union, who then fought under Hitler. But I can not forgive fascism and Nazism that encouraged its strong supporters – leaders or executers – to eliminate the people of my country with obscenity and cruelty. It doesn’t matter where did they do this: in Russia, Belarus or Ukraine, republics of Northern Caucasus or the Baltic states. Forgive? No. Remember? Yes!

That is why the 9th of May is a Victory Day for me. Let the countries of free Europe celebrate the Day of Memory and Reconciliation. Cause they had no Victory. They were liberated from a fascist’s slavery. And we, the liberators, who payed a unmeasured price for the wright to live and to love, had a Victory.

Anyway, even at this holly day I just can’t ignore the dark and not popular chapters of modern Ukrainian history. I mean the year 2014, the 9th of May by the way. Five years have past. Almost an anniversary.

Early in the mourning the citizens of Mariupol came out of their houses and were going to take part in a sacramental meeting, devoted to the Victory Day. By longstanding tradition they put flowers to the monuments of the fallen warriors.

Let me remind you, those may days preparations to the referendum for proclamation of Donetsk people’s republic were held. The referendum was assigned for 11th of May.

In this red-letter morning a quite strange situation at the chief administration of internal affairs of Mariupol occurred. It reminded a provocation actually.

Somebody opened fire. Official version of the ukrainian government states that DSR separatists planned to take the building by storm. The version of DSR combatants states that there were other reasons for shooting: Mariupol policemen refused to obey an order of a new government to prevent the referendum…

Anyway a true combat operation starts around the building. Armoured vehicles of 72 - nd infantry brigade is brought into the city. Sadly remembered battalion called «Azov» begins to assault the building of chief administration of internal affairs and they shell it with RPG. It burns to the ground.

Frankly speaking, «evil terrorists» were not identified. And it was impossible to capture them. There were victims anyway – ukrainian militants and Mariupol civilians. Local people were to they way home after the meeting devoted to The Victory Day when armored vehicles entered the streets.

People were stopping combat vehicles with bare hands.However, in a short time afterwards the shooting stopped. Militants from ukrainian capital left the city and stepped back to Mariupol airbase.

So what was that?

Being a member of Security Service of Ukraine I spoke a lot with citizens of the city in 2014.

I know for sure that local police at that time held a neutral position. Lots of policemen showed their prorussian position in public.Newly-appointed chef of police Valery Androshyk didn`t have real power to rule the police officers. Most of the local people disapproved of Kiev policy. Furthermore ash of Odessa was still covering hearts of people…

Kiev authorities wanted to frighten Mariupol. They could not afford to lose big industrial center, port and a heavily populated city.

To make people and hesitating policemen afraid Kiev has organized a bloody provocation. A gunbattle was a cause to bring armoured vehicles to the city.

Here is a document to prove that. This is a letter of Donetsk zone department of public order where the occasions on the 9th of May are reported.

You may agree that the paper raises a lot of questions. 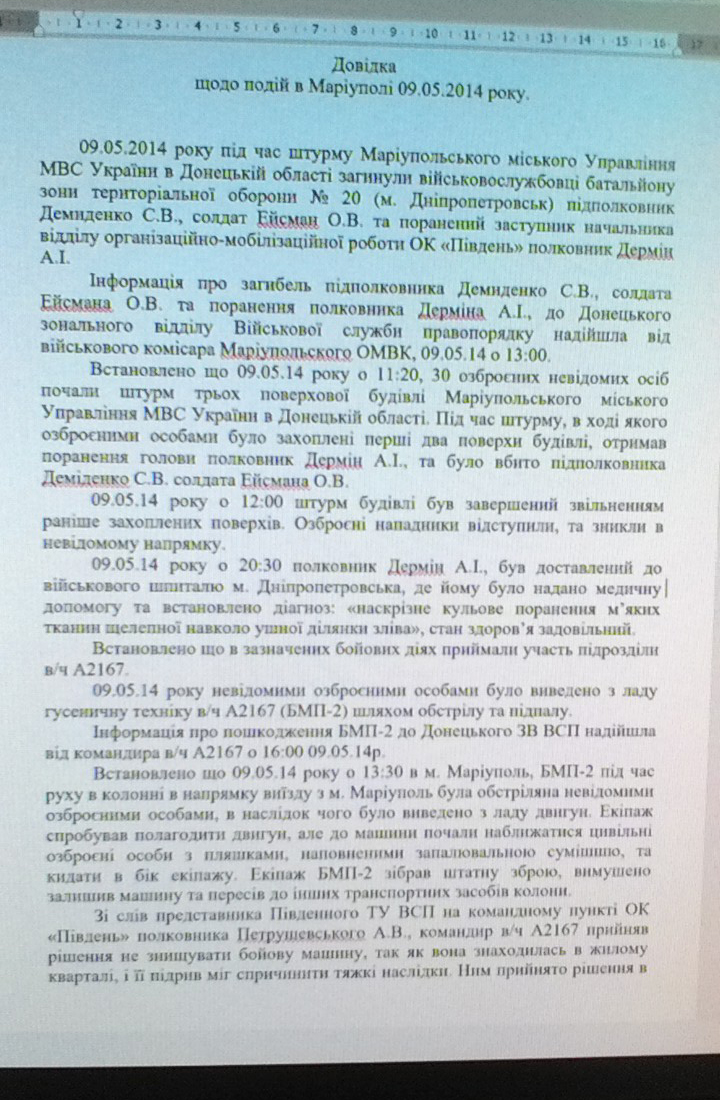 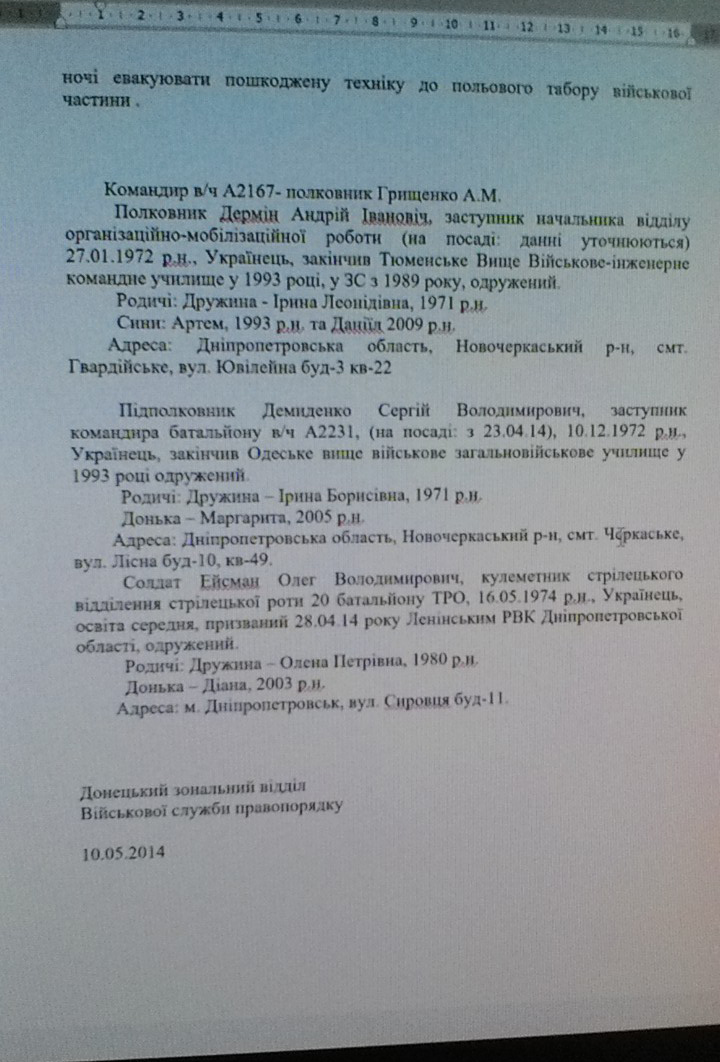 Where did 30 armed unknown people go? At that moment there were many different force structures, «Azov» and Dnepropetrovsk battalion of territorial defence. Lots of video reports show that the building was surrounded by ukrainian militants.

Efforts of 72nd brigades commanders to explain the loss of an infantry combat vehicle look ridiculous. They can`t admit that the machine was stopped by simple civilians. It is more safe to blame the «unknown armed men».

What happened in Mariupol on the 9th of May in 2014 – is another episode in a row of criminal deeds of Kuiv authorities that was trying to put down the people of Donbass. I refuse to understand and I don`t have the heart to say: in Mariupol the authorities were trying to break peoples will and were ready to kill. A crime that has no period of prescription…

Andrey Dermin – colonel, deputy of chief of mobilization department of A2167 troop unit.

Sergey Demidenko – lieutenan-colonel, deputy of chief of battalion of A2231 troop unit.

72nd infantry brigade – troop formation of mechanized forces of Armed Forces of Ukraine. Based in 2002, on the basis of 72nd Guards mechanized infantry division. Deployed in Bila Tserkva, Kiev Oblast.

Special task unit «Azov» – special task operating unit as part of 3057 troop unit of Eastern operating territorial command of Ukrainian National Guard. Composed of volunteers in may of 2014 in Mariupol as a battalion of special operation patrol service of police of Interior ministry of Ukraine.