Firstly, I want to explain you, dear readers, the nature of these documents.

The Security Service of Ukraine (SBU) has such kind of documents which, in official language, function in T-1 mode. The colloquialism of this mode sounds like «teshka». When it comes to some kind of «sensitive matters», that unit which «lead the process» reports about the results in «teshka» mode.

The peculiarity of these documents is that they are traceless, in respect to their specificity. «Teshkas» don’t have any tags. They are neither recorded nor filed. As a rule, they’re shredded after being read. However, such documents exist and they’re widespread. For example, when it comes to elections… SBU units are locally used for assistance to one of candidates. Or when it comes to control of some public event where it’s a bad form to blow a whistle about the presence of security service.

The first document for today is Odessa region SBU unit’s «teshka» dated by 2 May, 2014 (as at 7 p.m.) and directed to SBU anti-terror center’s (ATC) headquarter (HQ). The second one is a briefing note which is prepared by ATC’s HQ when they provide the control of public events. This briefing note is based on information which comes to ATC’s HQ from different units of security service: outdoor surveillance, counterintelligence, military counterintelligence (when dealing with military units which take part in events), statehood and constitutional order protection unite. All the information is accumulated, generalized and prepared as a briefing note. This second document, exactly is such kind of generalized briefing note of SBU ATC dated by February 22, 2016. For information - it was an anniversary of Maidan protests and there were public rallies in Kyiv then.

So, now it’s time to speak about the quick of the matter but with some lyric.

«Oh, Odessa – a seaside pearl». It’s one of few cities which is loved not only by me, I think. The city which is not needed in additional representation. The city of David Gocman and Mishka Yaponchik, of Abram and Sara, of Boris Zhitkov and Isaak Babel, of Leonid Utyosov and Rodion Malinovsky.

The city of good humor, clean sea, military and labor glory. But 2014 is a year when a dark page appeared in its light reputation and it was written by the authors of new, post-Maidan Ukraine.

Deplorable events of 2 May, 2014 in Odessa – this year we mourn the fifth anniversary of those events – became a dividing range for populace. A good few perceived it as a «permission of democratic regime»: you could do whatever you want chanting «Glory Ukraine». Keeping this way, you’ll avoid any punishment, even for murder.

Another people, including me, have realized: if you want to keep your right on other opinion, your mother-tongue – be ready to fight for it. Otherwise you may be burnt as dozens of Odessites.

Many things were said about that tragedy in Odessa – except one – who is guilty for it?

Let’s return to the events of 2 May, 2014 and give the floor to the documents.

According to Odessa region SBU’s «teshka» dated by 2 May, 2014 during the «Ukrainian unity» rally which was held by representatives of nationalist organizations such as «Maidan», «Right sector», «Self-protection» and football hooligans of Odessa «Chornomorets» and Kharkiv’s «Metalist» (all in all up to 600 people) there happened clashes with pro-Russian activists (all in all up to 300 people).

Both sides actively threw paving stones, erected barricades and even captured the fire-engine.

After the final whistle of the football match at 7 p.m., the representatives of nationalist groupings reinforced by football hooligans went straight ahead to Kulikovo field. The vengeful crowd destroyed the tent camp which was pitched by pro-Russian activists and began to storm the house of Trade Unions where the latter have sheltered.

It’s not a secret that security services have a some kind of influence on both: the members of nationalist groupings and football ultras.

To confirm this fact – here’s the document number 2. 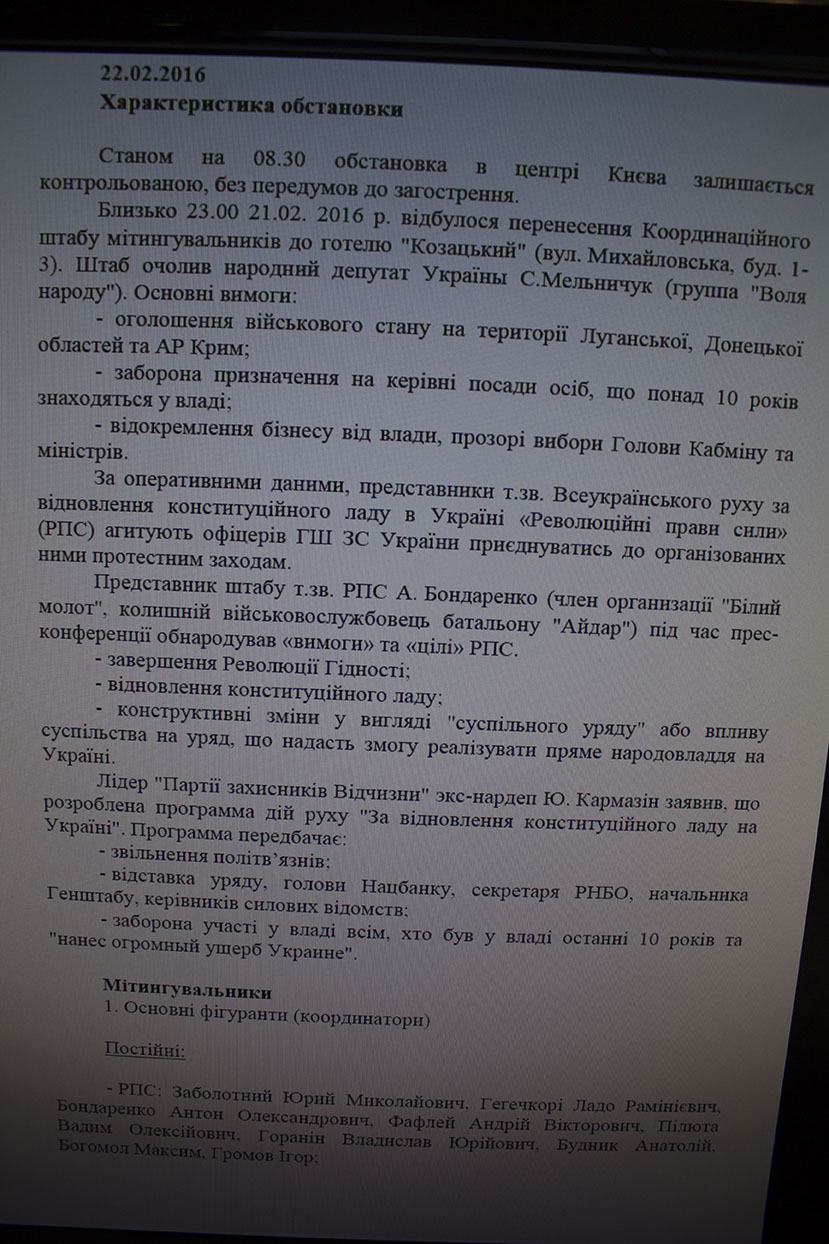 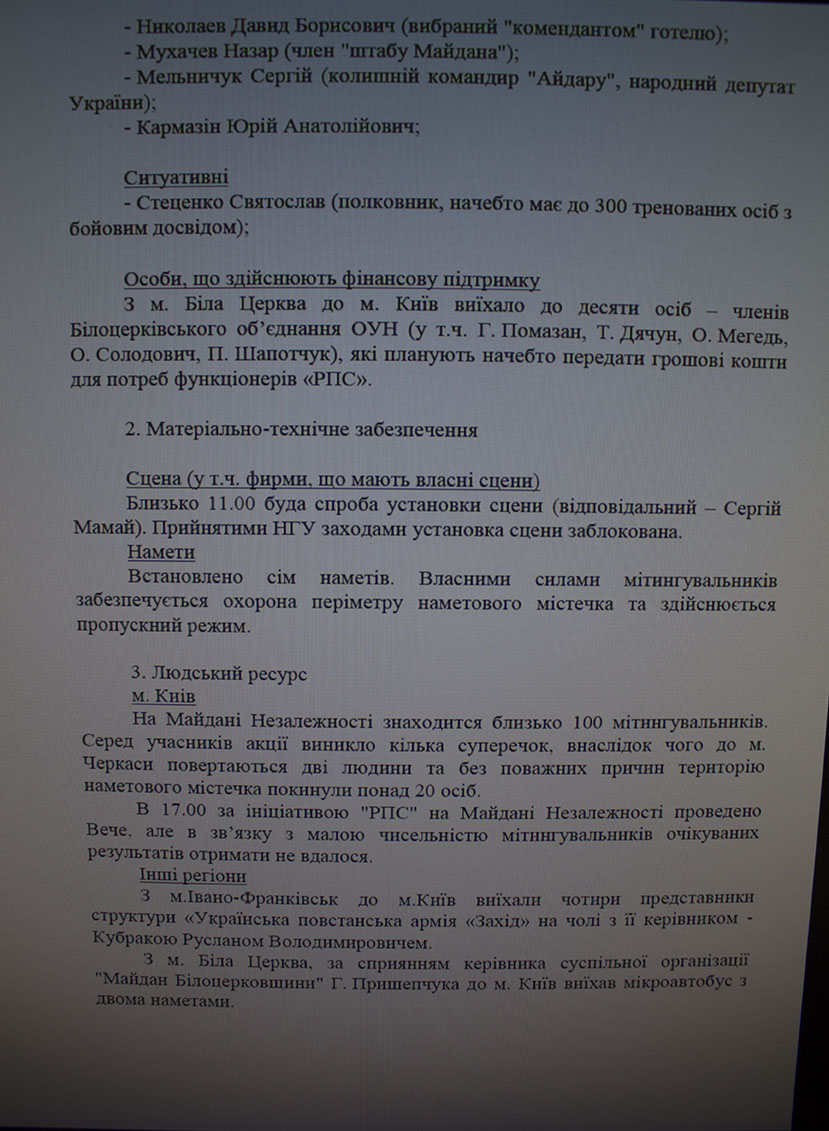 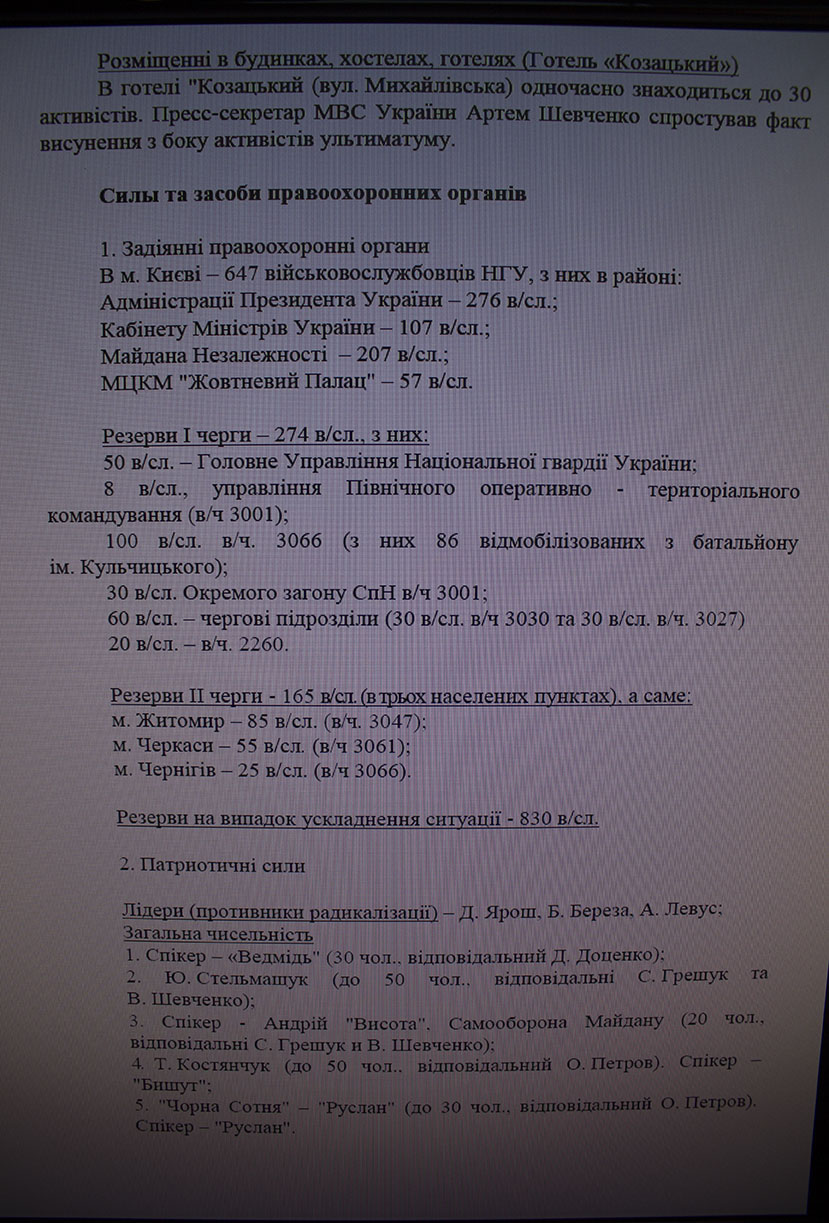 There were no clashes, no appeals to overthrow the power. However, the Ukrainian security officials kept the events under their total control. They got the information about the persons, amount of members and place of events. They also got the info about the persons who have provided the financial support, about the «fakes» which have been spreading in social media. That’s why the document is wide. I find no sense to translate it. You can read it full if you want.

But here’s a section I want to mark:

2. Y.Stelmaschuk (up to 50 people, S.Greschuk and Shevchenko – the senior figures).

3. The speaker – Andrew «The High» Maidan Self-Defense (up to 20 people, S.Greschuk and Shevchenko – the senior figures).

There’s no need to represent the followers of «Patriotic Force” in the same way as for Maidan Self-Defense and «The black hundred». And who are these people who are marked as «senior figures»?

Danil Dotsenko. He is a major general now and the head of SBU Department for the protection of national statehood (DPNS). Right after Maidan events his career flourished. He was transferred from Chernivtsi to Kyiv department, where he was responsible for contacts with «Right Sector» He is a fellow sponsor of Dmitry Yarosh. He became the head of SBU DPNS, the head of SBU’s Crimea issues department, the head of department in Kherson region and finally – the head of above-mentioned department which operates in social, politic, social media and religion spheres.

Stepan Greschuk. In 2014 he was an official of SBU Central Department. Later in November 2015 «for achievements in fighting separatism» he was encouraged with appointing as the head of SBU Department in Kyiv and Kyiv Region.

Why did I mark this document and mentioned the last name of SBU officials who are the «senior figures» in “patriotic forces»? It’s just because you should to realize: SBU has a total control over these groupings, just like they had it in 2014. That’s why the thought that SBU officials didn’t know that their clouted had gone to Odessa for clashes in the street – is a Holly Fool which belies the common sense and Aristotelian logic.

I’ve drawn a distinct and simple conclusion for myself: SBU officials controlled the nationalists and ultras in Odessa on 2 May, 2014. They controlled them and ordered them. The blame for mass killing of Ukrainians mostly rests with SBU.

Stepan Greschuk – the former head of of SBU Department in Kyiv and Kyiv Region.

The Secret Service of Ukraine (SBU) – is a special-purpose law-enforcement agency, which provides state security of Ukraine and is subordinated to the President of Ukraine.

Maidan People’s Union – is an alliance in Ukraine formed by several political parties and public organizations. It was created for kicking off the revolution.

«The Right Sector» – the alliance of activists who represents a number of nationalist far-right organizations.

«Chornomorets» – is a Ukrainian football club based in Odessa.

«Metalist» – is a Ukrainian football club based in Kharkiv.

«Maidan Seld-Defense» – is a nongovernment organization which was created in Kyiv on 1 December, 2013 in response to the crackdown of EuroMaidan by law enforcement.

«he Black Hundred» – is a voluntary nationalist battalion which operates under SBU control.

“The Patriotic Forces” – is a Ukrainian political party.